The Mormon President of Ohio State University announced his retirement last week amidst controversy over his anti-Catholic remarks. Gordon Gee has a long history of “verbal gaffes,” but his recent comments about “those damn Catholics” apparently crossed the line. According to news reports,

“’The fathers are holy on Sunday, and they’re holy hell on the rest of the week,’ Gee said to laughter at the Dec. 5 meeting attended by Athletic Director Gene Smith, several other athletic department members, professors and students.

“’You just can’t trust those damn Catholics on a Thursday or a Friday, and so, literally, I can say that,’ said Gee, a Mormon.” 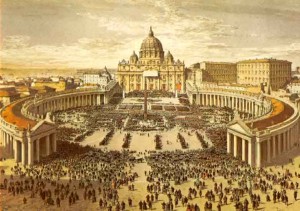 Dr. Gee later apologized for his comments, explaining that they were “a poor attempt at humor and entirely inappropriate.” Though he offended some people, Dr. Gee’s remarks were pretty tame as compared to the rhetoric against Catholicism pronounced by leaders of his church in the past. The following statements by Mormon Church leaders are quoted from Bill McKeever’s book, In Their Own Words.

“Secondly, it is objected that if the Church of Christ has not continued, then the gate of hell must have prevailed against her; and they refer us to that cheering passage in Matthew 16:18 which reads thus:—‘And I say also unto thee, that thou art Peter; and upon this rock I will build my Church, and the gates of hell shall riot prevail against it.’ They argue, that if the Church has ceased to exist, the gates of hell have prevailed over her and the promise of Jesus must be falsified. But we would inform the Catholics, that the Church of Christ has not ceased to exist, neither has Peter ceased his existence, but both the Church and Peter are in heaven, far out of the reach of the gates of hell, and far out of the reach of the abominable soul-destroying impositions of popery. The gates of hell have prevailed and will continue to prevail over the Catholic mother of harlots, and over all her Protestant daughters; but as for the apostolical Church of Christ, she rests secure in the mansion of eternal happiness, where she will remain until the apostate Catholic church, with all her popes and bishops, together with all her harlot daughters shall be hurled down to hell; then it shall be said, ‘Rejoice over her thou heaven, and ye holy apostles and prophets; for God hath avenged you on her;’ and then shall be ‘heard a great voice of much people in heaven, saying, Alleluia: salvation, and glory, and honor, and power, unto the Lord our God; for true and righteous are his judgments: for he hath judged the great whore, which did corrupt the earth with her fornication, and hath avenged the blood of his servants at her hand.’ And again they shall say, ‘Alleluia,’ and her smoke shall rise up for ever and ever. And thus when the Catholics and Protestants hear all the heavens, and all the holy apostles and prophets, rejoicing over the downfall of Babylon, they will learn that the Church of Christ still exists in heaven and that the gates of hell have not prevailed against her; then they will learn where the apostolical and prophetical power rests; then they will perceive the difference between the glory of the Church of Christ and the misery and wretchedness of their own fiery torments” (Mormon Apostle Orson Pratt, Divine Authenticity of the Book of Mormon, 1850, No.3, p. 44).

“Christianity, as it is known in the world today, has fallen far short of the accomplishment of what might have been expected of it. It has failed in establishing those principles which Christ taught among the children of men. The great Catholic division of the Christian world, the Catholic church, is a national liability to any country. It wields a great power over the minds and the hearts of the children of men, but it is a power for evil rather than for good. It brings countless thousands regularly to confession; it rarely brings a single man to repentance and the abandonment of his sins” (Mormon Apostle Hyrum M. Smith, Conference Reports, October 1916, p. 42).

“The Roman Catholic, Greek, and Protestant church is the great corrupt ecclesiastic power, represented by great Babylon which has made all nations drunk with her wickedness, and she must fall, after she has been warned with the sound of ‘the everlasting gospel.’ Her overthrow will be by a series of the most terrible judgments which will quickly succeed each other, and sweep over the nations where she has her dominion, and at last she will be utterly burned by fire, for thus hath the Lord spoken. Great, and fearful, and most terrible judgments are decreed upon these corrupt powers, the nations of modern Christendom; for strong is the Lord God who shall execute His fierce wrath upon them, and He will not cease until He has made a full end, and until their names be blotted out from under heaven” (Mormon Apostle Orson Pratt, Divine Authenticity of the Book of Mormon, No.6, pp. 84-85. Brackets in original).

34 Responses to Mormons speaking of Catholicism: Surely they jest…?