Posted on September 30, 2013 by Sharon Lindbloom

“A recently republished document written by a man who disliked Mormonism but knew Martin Harris testifies yet again to the solid good character of one of the Three Witnesses to the Book of Mormon.” 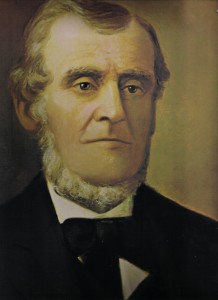 As his source, Dr. Peterson focuses mainly on an article published in the mid-1800s by the Christian Mirror of Portland, Maine. The Christian Mirror article was a reprint of an article written as a sort of obituary for Martin Harris (mistakenly believed to have been killed in Nauvoo, IL) and published in the Rochester Daily Democrat. Written by former Palmyra, New York resident Alvah Strong, the article is a personal reflection from one who knew Martin Harris as early as 1828.

I was unable to find the Christian Mirror article (online) to which Dr. Peterson refers, but I did find what appears to be the original article published by the Rochester Daily Democrat on June 23, 1841. The article does indeed praise the character of Martin Harris. Dr. Peterson relates the essence of Mr. Strong’s tribute,

“‘We have ever regarded Mr. Harris as an honest man,’ Strong wrote, referring also to Martin’s sturdy ‘native honesty.’ ‘He had long sustained an irreproachable character for probity.’ As Strong recalled him, Harris seemed to be sincere, and he had dedicated himself to the cause of Mormonism ‘even at the expense of his own pecuniary interests.’

“There is a particularly rich historical portrayal in one of Alvah Strong’s sentences about Martin:

“‘By his neighbors and townsmen with whom he earnestly and almost incessantly labored, he was regarded rather as being deluded himself, than as wishing to delude others knowingly, but still he was subjected to many scoffs and rebukes, all of which he endured with meekness becoming a better cause.’…

“…Strong remembered Harris as a humble, hardworking and sincere man, deeply devoted, notwithstanding mockery and opposition, to what he genuinely believed to be true.

“This is no insignificant fact: Martin Harris testified to the end of his life that, with David Whitmer and Oliver Cowdery, he had ‘seen the plates’ and ‘the engravings which are upon the plates.’”

I believe just a couple of significant statements that Alvah Strong made about Martin Harris are missing from Dr. Peterson’s article. To put them in a fuller context, this is from the Rochester Daily Democrat:

“Though illiterate and naturally of a superstitious turn of mind, he had long sustained an irreproachable character for probity. He became an early believer in the doctrines of Mormonism, and neglected no opportunity of inculcating them, even at the expense of his pecuniary interests. By his neighbors and townsmen with whom he earnestly and almost incessantly labored, he was regarded rather as being deluded himself, than as wishing to delude others knowingly; but still he was subjected to many scoffs and rebukes, all of which he endured with a meekness becoming a better cause.”

“We have not seen him since, and had supposed, until we saw the announcement of his death, and the cause of it conjectured, that he was still among the most zealous and conspicuous of Jo. Smith’s followers. But we were mistaken — Mr. Harris’s native honesty had gained the mastry of his credulity. He had been so long a confident of Smith and his leading associates, and had seen so much of their villainy, that he undoubtedly felt it a duty to expose them and their debasing doctrines. Hence his lectures against Mormonism in Illinois, and hence, too, his probable murder by some of that sect.” [Like the error of Martin Harris’ reported death, the report of his lectures against Mormonism seems also to be in error.]

Dr. Peterson made it clear in his article that Alvah Strong was no fan of Mormonism, and that comes through loud and clear in the Rochester Daily Democrat obituary. Nevertheless, perhaps Mr. Strong’s testimony to Martin Harris’ “superstitious turn of mind,” the context of the proselytizing nature of his “earnest and incessant labors” with his neighbors, and his “native honesty” being presented as something that finally overcame his unfortunate tendency toward gullibility, are important elements for readers wanting to understand Alvah Strong’s attestation of Martin Harris’ character. 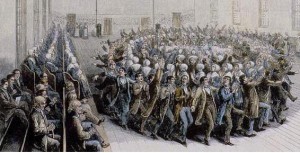 “He was first an orthodox Quaker, then a universalist, next a Restorationer, then a Baptist, next a Presbyterian, and then a Mormon.” (G.W. Stodard [Stoddard], November 28, 1833, Early Mormon Documents, 2:29-30)

Following his excommunication from the Mormon Church in 1837,

“Martin Harris remained at Kirtland for the next 30 years… In this period of his life he changed his religious position eight times, including a rebaptism by a Nauvoo missionary in 1842. Every affiliation of Martin Harris was with some Mormon group, except when he was affiliated with the Shaker belief…” (Improvement Era, March 1969, 63)

According to Phineas Young, who wrote a letter to his brother Brigham in 1844,

“Martin Harris is a firm believer in Shakerism, says his testimony is greater than it was of the Book of Mormon.” (Wayne Cutler Gunnell, BYU Dissertation, 52, quoted in Tanner and Tanner, The Changing World of Mormonism, 106)

“One of the witnesses to the Book of Mormon, yielded to the spirit and temptation of the devil a number of years ago—turned against Joseph Smith and became his bitter enemy. He was filled with rage and madness of a demon. One day he would be one thing, and another day another thing. He soon became partially deranged or shattered, as many believed, flying from one thing to another, as if reason and common sense were thrown off their balance. In one of his fits of monomania, he went and joined the ‘Shakers’ or followers of Anne Lee. He tarried with them a year or two, or perhaps longer, having had some flare ups while among them; but since Strang has made his entry into the apostate ranks, and hoisted his standard for the rebellious to flock to, Martin leaves the ‘Shakers,’ whom he knows to be right, and has known it for many years, as he said, and joins Strang in gathering out the tares of the field.” (GospeLink, Orson Hyde, “Martin Harris,” Millennial Star, 8:124)

So while it seems pretty clear that Martin Harris was, as Dr. Peterson wrote, a man who could be counted on to be “deeply devoted…to what he genuinely believed to be true,” there is no reason to believe that he ever knew what actually was true.

“Many in the Christian world are sincere, and their false doctrinal conclusions are not their own fault.” (Old Testament Student Manual 1Kings-Malachi Religion 302, 15-21, Isaiah 29:24, 166)

This charitable sentiment could easily be applied to the “humble, hardworking and sincere man,” Martin Harris.

Sharon surrendered her life to the Lord Jesus Christ in 1979. Deeply passionate about Truth, Sharon loves serving as a full-time volunteer research associate with Mormonism Research Ministry. Sharon and her husband live in Minnesota.
View all posts by Sharon Lindbloom →
This entry was posted in Book of Mormon, Mormon History and tagged Book of Mormon, Daniel, Martin Harris, Mormonism, Three Witnesses. Bookmark the permalink.

69 Responses to Martin Harris: A Sincere Book of Mormon Witness