Posted on September 23, 2013 by Sharon Lindbloom

There seems to be continuing dissatisfaction among Mormons over the workings of their church. In addition to the “wear pants to church” movement, the “give women the priesthood” movement, and the “pull The Not Even Once Club off the bookstore shelves” movement, Slate magazine recently published an article about the exclusivity of temple sealings (weddings). 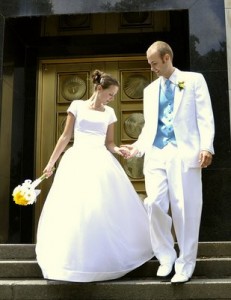 In “Sorry, Your Friends Can’t Come to Your Mormon Wedding,” journalist Holly Welker explores the Mormon Church policy of, as she puts it, “punishing couples who have separate civil ceremonies by making them wait a year for a temple marriage.”

This is the policy in a nutshell: Unless required by law, Mormon couples are urged to eschew inclusive civil marriage ceremonies in favor of exclusive temple sealing ceremonies. If a couple chooses to proceed with a civil ceremony in order to include their family and friends in the wedding, they are then required to wait a full year before being allowed to be sealed “for time and eternity” in a Mormon temple. During this waiting period, according to a 1960 Church handbook, the couple will “demonstrate their sincerity and worthiness to receive this blessing” (the 2010 handbook continues the policy, but gives no reason for it).

This does sound a bit like punishment, doesn’t it?

The Mormon marriage policy, which comes into play in only a few countries throughout the world, causes great distress, not only for the engaged couples whose temple sealings would exclude parents, grandparents, siblings and treasured friends from their weddings, but also for all those excluded.

According to Ms. Welker (and others), it doesn’t have to be this way. In fact, it isn’t this way outside of the US, Canada and South Africa. And it wasn’t this way anywhere before 1960. But today the choice seems to be a measure of a couple’s faithfulness.

“Over time, the policy of exclusion has become so important that ‘young Mormons think it’s a commandment, and they think they’re breaking a commandment and doing something sinful if they get married outside the temple,’ says [Jean] Bodie. ‘Rejecting and excluding your inactive or nonmember family is a mark of being a good Mormon,’ because the alternative is so shameful.”

Because this whole thing is based on Church policy (not doctrine or commandment),

“some faithful Mormons are asking leaders to reconsider the policy of forcing couples wherever possible to wait a year for the sealing if they also have a civil ceremony. A new website, Family First Weddings, collects statements about the policy and encourages members to write respectful letters to the church hierarchy explaining how the policy hurts them and their relationships.”

For example, “Dreading the Happiest Moment of My Life” tells the story of a young woman who grew up knowing that her non-Mormon father would not be allowed to attend her future wedding. She wrote,

“I wonder how many tears I wouldn’t have had to shed during my teenage and college years worrying and wondering what would happen when the moment [of my temple wedding] came… I wonder how much I sacrificed for the sake of a policy that I assumed was the eternal word of the Lord.”

Many more stories on the Family First Weddings site describe various ways this Mormon Church policy wounds people, as their titles testify: “Heartbreak on a Day of Joy,” “Supporting but in Pain,” “My Empty Wedding,” “My Wedding Sans Siblings,” and “Painful Wedding Day,” to name but a few.

Family First Weddings explains, “…we are asking our Church leaders to inquire of the Lord if the one year wait on the temple sealing can be changed…” Ms. Welker contacted a Church spokesman for a comment about this new campaign and was told only that “Church leaders are aware of, and sensitive to, this issue.”

One might also wonder if Church leaders are aware of Doctrine and Covenants Section CI (101) from the 1835 edition, which reads in part,

“…we believe, that all marriages in this church of Christ of Latter Day Saints, should be solemnized in a public meeting, or feast, prepared for that purpose: and that the solemnization should be performed by a presiding high priest, high priest, bishop, elder, or priest, not even prohibiting those persons who are desirous to get married, of being married by other authority.” (1835, Section CI:1)

This Section of Doctrine and Covenants was included in Mormon scripture for over 40 years, but was removed from the D&C for the 1876 edition. Since the prevailing thought is that Section CI was deleted due to its denial of plural marriage (while the practice of plural marriage was in full swing in the 1876 Mormon Church), its statement that Mormon marriages should be solemnized in a public meeting need not be discarded as if throwing the baby out with the bath water.

Perhaps Mormon Church leaders will be moved to compassion by the pleadings of the people over whom they hold spiritual sway. One can only hope that they will remove “the heavy burdens, hard to bear,” that they have laid on the shoulders of these couples for the sake of mere policy (Matthew 23:4).

“Come to me, all who labor and are heavy laden, and I will give you rest.
Take my yoke upon you, and learn from me, for I am gentle and lowly in heart,
and you will find rest for your souls. For my yoke is easy, and my burden is light.”
(Matthew 11:28-30)

Sharon surrendered her life to the Lord Jesus Christ in 1979. Deeply passionate about Truth, Sharon loves serving as a full-time volunteer research associate with Mormonism Research Ministry. Sharon and her husband live in Minnesota.
View all posts by Sharon Lindbloom →
This entry was posted in D&C and Pearl of Great Price, LDS Church, Mormon Culture and tagged Doctrine and Covenants, Eternal Marriage, Marriage, Mormon Church, Mormon Marriage. Bookmark the permalink.