The Late War and the Book of Mormon

Posted on November 7, 2013 by Sharon Lindbloom

A 19th century book, The History of the Late War Between the United States and Great Britain, has been mentioned before now as a possible source for the Book of Mormon, most notably by Rick Grunder in his 2008 work, Mormon Parallels: A Bibliographic Source. But the suggestion that Joseph Smith may have used this book in his writing of the Book of Mormon hasn’t seemed to gain much traction until now.

At the 2013 Ex-Mormon Conference in mid-October, former Mormon Chris Johnson presented findings he and his brother, Duane, uncovered in their study and analysis of a comparison of the two books. Mormon discussion forums and blogs are now in serious dialogue about how Gilbert Hunt’s 1819 New York textbook relates to the Book of Mormon, and in some cases more specifically, how it undermines the popular apologetic reliance on Hebraisms to substantiate the ancient origin of this Mormon scripture. 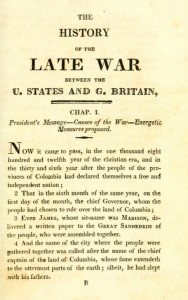 Gilbert Hunt wrote The Late War in imitation of the “biblical style,” in the hope that any young student reading the book would acquire a love for the style and it would become “an inducement to him to study the Holy Scriptures.” Consequently, The Late War employs word structures and ancient-sounding language that reads very much like the Bible (KJV) – and the Book of Mormon.

Some people see the strong Book of Mormon parallels in The Late War as proof that Joseph Smith, a person with easy access to Gilbert’s book, used it in composing the Book of Mormon – thus negating any pretense that the Book of Mormon is divine. Others merely shrug and dismiss the whole thing as unimportant. The actual significance of The Late War is more likely somewhere in between. Yet one thing is certain: Hebraisms found in the Book of Mormon do not prove a thing about its origin. In fact, they shouldn’t even be presented as any sort of persuasive evidence.

Tvedtnes: Hebrew has fewer adverbs than English. Instead, it often uses prepositional phrases with the preposition meaning in or with. The English translation of the Book of Mormon contains more of these prepositional phrases in place of adverbs than we would expect if the book had been written in English originally—another Hebraism. Here are some examples:
“with patience” instead of patiently (Mosiah 24:15)
“with much harshness” instead of very harshly (1 Nephi 18:11)
“with joy” instead of joyfully (Jacob 4:

The Late War: Ch VII, p.46, 43. “So William was ordered to depart to the land which lieth in the east, where he remaineth unto this day, and his name shall be no more spoken of with reverence amongst men.”
Ch XIX, p.101, 20. “And the men of Columbia rushed forward with fierceness, and drove the men of Britain from their strong hold.”

The Late War: Ch XLIII, p.222, 2 “But it was lighted up by the hand of heaven, and not to be extinguished by the insignificant and self-created gods of the earth.”

The Late War: Ch XLVIII, p.255, 34 “Now when the men of Columbia heard that Ross, the chief captain of the king, was slain, and the host of Britain was compelled to flee from before the city, they were exceedingly rejoiced.”

As the discussion on the forum developed, participants presented additional interesting parallels and comparisons between the Book of Mormon and The Late War, all worthy of consideration. But for this blog post, one thing I found quite notable was a comment made by Mormon apologist Daniel O. McClellan. Responding to another commenter who suggested that people in Joseph Smith’s time would have been crying “Plagiarism!” had the Book of Mormon strongly reflected the content of The Late War, Mr. McClellan (posting as “maklelan”) wrote,

“It’s not plagiarism that’s the question here. The question is whether or not The Late War is an indication that Hebraisms can crop up in modern non-Hebrew compositions that are being patterned after the linguistic style of the KJV, and I think the answer is certainly yes. There have been many Latter-day Saint scholars who have argued that Book of Mormon Hebraisms are of no apologetic value if they can be shown to be found within the KJV. They can arise just from the couching of new ideas in KJV-sounding language. The Late War certainly shows that, since many of the putative Hebraisms that people have pointed to before as an indication of the Book of Mormon’s ancient provenance are also found there. Appealing to Smith’s lack of education is no help here, as it doesn’t take formal education to repeat grammatical patterns you have had ingrained in you your entire life.”

Mr. McClellan said in another comment found a little further on,

“It’s my impression that the Hebraisms arise almost entirely from the mimicking of biblical prose. The presence or absence of a Hebraism from any given segment of text is a function of the proximity of Smith’s choice of prose to particularly Hebraic constructions from the KJV.”

Rick Grunder’s Mormon Parallels quotes BYU professor Donald Parry who, in 2002, wrote that that Hebraism’s in the Book of Mormon “attest to the book’s Near Eastern background and antiquity. Their presence cannot be explained as a matter of coincidence, nor could a modern writer have integrated them so effectively (naturally and correctly) throughout the narrative.” These literary forms, Dr. Parry wrote, “were generally uncommon in, if not altogether foreign to, the English of Joseph Smith’s day.” Dr. Parry was mistaken. The Late War demonstrates that writing done in the biblical style, complete with integrated Hebraism’s, was a genre employed during the time, and in the place, of Joseph Smith’s youth. Therefore, Hebraism’s do not persuasively attest to an ancient origin for the Book of Mormon.

Sharon surrendered her life to the Lord Jesus Christ in 1979. Deeply passionate about Truth, Sharon loves serving as a full-time volunteer research associate with Mormonism Research Ministry. Sharon and her husband live in Minnesota.
View all posts by Sharon Lindbloom →
This entry was posted in Book of Mormon, Mormon Scripture and tagged Book of Mormon, Gilbert Hunt, Hebraisms, Joseph Smith, Rick Grunder, The Late War. Bookmark the permalink.

22 Responses to The Late War and the Book of Mormon