Mormonism: A Religion Only Understood by Its Own?

I was speaking to somebody recently about ministry in Utah. This man, a professional clergy member who recently moved to Utah, told me proudly, “Our church will never host any class teaching about Mormonism. After all, it not only could be offensive, but what right would I have to teach on this subject? Only a former Mormon could really understand Mormonism.”

His analysis fits right into the teaching of former President Gordon B. Hinckley who, in the Ensign honoring the bicentennial of Joseph Smith’s birthday, said the following:

“Once while riding in a plane, I engaged in conversation with a young man who was seated beside me. We moved from one subject to another and then came to the matter of religion. He said that he had read considerably about the Latter-day Saints, that he had found much to admire in their practices, but that he had a definite prejudice concerning the story of the origin of the Church and particularly Joseph Smith. He was an active member of another organization, and when I asked where he had acquired his information, he indicated that it had come from publications of his church. I asked what company he worked for. He proudly replied that he was a sales representative for an international computer company. I then asked whether he would think it fair for his customers to learn of the qualities of its products from a representative of its leading competitor. He replied with a smile, ‘I think I get the point of what you’re trying to say’” (President Gordon B. Hinckley, “Joseph Smith, Jr.: Prophet of God, Mighty Servant,” Ensign, December 2005, p. 2). 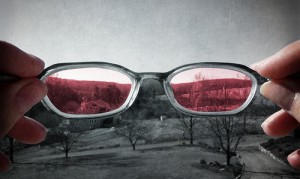 There are three major problems with this mindset. First of all, while everyone has presuppositions—you can even call it bias—this should not automatically discount their views. In the scenario described by Hinckley, both he and the young man processed information through different worldview lenses. Even the media—when I majored in journalism at San Diego State, the professors drilled into me that “objectivity” was the goal—approaches issues with a unique set of rose-colored glasses.

Fortunately, there are venues for a person to receive information that will be most beneficial in making a decision. For instance, the magazine Consumer Reports tests products, analyzing them to determine which car, toaster, or cell phone is rated superior based on a battery of tests. Besides consulting this magazine when intending to make a purchase, the shrewd consumer will also consider the information found on multiple Internet websites. If a product has poor workmanship, shouldn’t this information be processed before wasting time and effort purchasing the wrong version of the product? To say that those writing in Consumer Reports or a variety of Internet sites are ineligible to make a comment just because they never owned those particular products, past or present, is nothing less than silly. Weighing a variety of opinions makes perfect sense.

Second, if it’s necessary for somebody to belong to a certain group (as Hinckley made it appear) or at least once belonged to the group at one time (as the pastor seemed to suggest), then must I be an abortion doctor or have had an abortion in the past to speak authoritatively on the issue of abortion? Could I honestly critique a Democratic proposal in Congress if I am not (and never was) a part of this political party? And can I honestly say cocaine and heroin are harmful drugs if I’ve never experienced them for myself? If the answer to these questions is “no,” then why is it necessary for a person to be (or have been) a Latter-day Saint to have the ability to critique its teachings?

Third, Hinckley seems to suggest that a competing computer company is only going to mislead about its competitor’s product. But turn this around. If Ford decides to advertise its Tundra, will it produce a commercial explaining how their vehicle is much worse than what Toyota is producing? Of course not! Given the chance, a company’s own vehicle will win every survey/test/comparison. Corporations such as Ford and Toyota have vested interests, just as Mormon and Jehovah’s Witness leaders do.

For example, you will never hear a Mormon leader giving a general conference message this way: “Wow, it’s amazing how Joseph Smith was able to manage 33 wives, including 11 of whom were married to other men!” These leaders never talk about Smith’s polygamous ways! In the same way, they won’t spend much time focusing on the many problems with the historicity of the Book of Mormon or pontificate on how the Mormon view of God contradicts the teachings of the Bible.

Where can a person hear the other side? Maybe from the competition! I remember the “Pepsi Challenge” surveys at county fairs, allowing consumers to drink unidentified sample cups of Coke and Pepsi products. Many people were surprised that the cup they chose as the best was not the same as what they normally drank.  What is wrong with having the other side present its case? Test what is being said. Don’t begrudge the information merely because it came from a source you might not like. Those who show such bias and succumb to the genetic fallacy are bound to make wrong decisions, whether it involves a truck, a soda, or a religion.

“Be willing to receive the truth, let it come from whom it may; no difference, not a particle. Just as soon receive the Gospel from Joseph Smith as from Peter, who lived in the days of Jesus. Receive it from one man as soon as another. If God has called an individual and sent him to preach the Gospel that is enough for me to know; it is no matter who it is, all I want is to know the truth” (Teachings of Presidents of the Church: Brigham Young, p. 16).

I also agree with President John Taylor, who said,

“If any person in the religious world, or the political world, or the scientific world, will present to me a principle that is true, I am prepared to receive it, no matter where it comes from” (Teachings of Presidents of the Church: John Taylor, p. 215).

I hope my attitude is the same. Let’s eliminate any fallacious thinking on this issue. The next time someone says that you don’t have a right to analyze an opposing viewpoint because you don’t belong to that religion/political party/etc., ask them if they should have a right to make such a philosophical statement if they are not a philosopher!

This entry was posted in Truth, Honesty, Prayer, and Inquiry and tagged Discernment, Evangelism, Gordon B. Hinckley, Honesty, Mormon Doctrine. Bookmark the permalink.

24 Responses to Mormonism: A Religion Only Understood by Its Own?