Charles Harrell is an Associate Professor at Brigham Young University. In his 2011 book, This Is My Doctrine: The Development of Mormon Theology, he discusses many issues not normally found in a typical LDS-authored book. One such issue is the “Adam-God Doctrine.” Dr. Harrell explains,

“The Adam-God doctrine, which according to available evidence was introduced in Mormonism by President Brigham Young, is the belief that Adam is literally God the Father—the father of our spirits and of Jesus Christ in the flesh. Despite President Young’s affirmation that this was a doctrine ‘which God revealed to me,’ [Brigham Young, “Discourse,” Deseret News, June 18, 1873, 308] it is no longer countenanced by the Church and, in fact, has been labeled by Bruce R. McConkie as a ‘deadly heresy’ inspired of the devil. [“The Seven Deadly Heresies,” 78]” (“This Is My Doctrine”: The Development of Mormon Theology (Part 1) (Kindle Locations 3935-3939)

In his book, Dr. Harrell notes that Brigham Young first preached the Adam-God doctrine during a sermon in April of 1852. Found in Journal of Discourses volume 1, Brigham Young was recorded saying:

“Now hear it, O inhabitants of the earth, Jew and Gentile, Saint and sinner! When our father Adam came into the garden of Eden, he came into it with a celestial body, and brought Eve, one of his wives, with him. He helped to make and organize this world. He is MICHAEL, the Archangel, the ANCIENT OF DAYS! about whom holy men have written and spoken–HE is our FATHER and our GOD, and the only God with whom WE have to do. Every man upon the earth, professing Christians or non-professing, must hear it, and will know it sooner or later…

“When the Virgin Mary conceived the child Jesus, the Father had begotten him in his own likeness. He was not begotten by the Holy Ghost. And who is the Father? He is the first of the human family; and when he took a tabernacle, it was begotten by his Father in heaven, after the same manner as the tabernacles of Cain, Abel, and the rest of the sons and daughters of Adam and Eve; from the fruits of the earth, the first earthly tabernacles were originated by the Father, and so on in succession. I could tell you much more about this; but were I to tell you the whole truth, blasphemy would be nothing to it, in the estimation of the superstitious and over-righteous of mankind. However, I have told you the truth as far as I have gone…

“Jesus, our elder brother, was begotten in the flesh by the same character that was in the garden of Eden, and who is our Father in Heaven. Now, let all who may hear these doctrines, pause before they make light of them, or treat them with indifference, for they will prove their salvation or damnation.” (Journal of Discourses 1:50-51; emphasis in the original)

Dr. Harrell suggests that Brigham Young got the idea for the Adam-God doctrine “from the ever progressive teachings of the Prophet Joseph Smith on the Godhead, the plurality of Gods, and origin of Adam and Eve,” but provides evidence that the 1852 sermon was the first public exposure of the teaching. He adds,

“To be sure, many of Young’s associates resisted this doctrine, arguing that it conflicted with earlier revelations. Later LDS commentators would minimize the significance of Brigham Young’s Adam-God teachings, explaining that he was either misunderstood or was merely theorizing. However one chooses to interpret the historical record, President Young discontinued teaching the doctrine publicly after 1861 and, following his death, the doctrine gradually fell into disfavor and is now regarded as heretical.”

Though Dr. Harrell uses the year 1861 as the end of Brigham Young’s public teaching that Adam is God the Father, Deseret News reported on a discourse preached by Brigham Young on June 18th, 1873 in which he said, 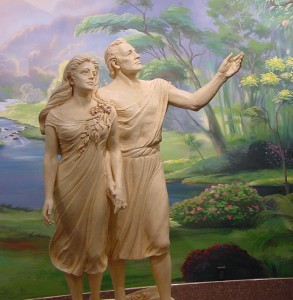 “How much unbelief exists in the minds of the Latter-day Saints in regard to one particular doctrine which is revealed to them, and which God revealed to me — namely that Adam is our father and God…Our Father Adam is the man who stands at the gate and holds the keys of everlasting life and salvation to all his children who have or ever will come upon the earth…

“[Father Adam] was the first man on the earth, and its framer and maker. He, with the help of his brethren, brought it into existence. Then he said, ‘I want my children who are in the spirit world to come and live here. I once dwelt upon an earth something like this, in a mortal state, I was faithful, I received my crown and exaltation. I have the privilege of extending my work, and to its increase there will be no end. I want my children that were born to me in the spirit world to come here and take tabernacles of flesh…” (Deseret News, June 18, 1873, 308 [at link see page 4])

Brigham Young’s Adam-God teaching was not insignificant during his lifetime. Just months before Brigham Young’s death on August 29, 1877, L. John Nuttall summarized part of the endowment ceremony’s lecture at the veil, composed by Brigham Young. As recorded in Nuttall’s journal, the lecture included this:

Nor did Brigham Young’s death put an end to the Saints believing his Adam-God doctrine. A dozen years after Brigham Young was gone, Abraham Cannon (then a President of the Seventy) related a conversation he had with his father, LDS Apostle George Q. Cannon (who was then serving in the First Presidency under Wilford Woodruff). George Cannon convinced his son of several “Gospel principles” and, among other tenets of Mormonism, related this doctrine:

“He [George Q. Cannon] believes that Jesus Christ is Jehovah, and that Adam is His father and our God…” (Journal of Abraham H. Cannon, June 23, 1889)

George Q. Cannon died in 1901, but Brigham Young’s Adam God doctrine lived on. Leaders of the Mormon Church began to make a greater effort to define the LDS doctrine of deity beginning around 1909, yet in 1912 it was reported that “some patriarchs had been teaching the Adam-God doctrine to Church members” (David John Buerger, “The Adam-God Doctrine,” Dialogue: A Journal of Mormon Thought, Spring 1982, 42). And in 1916 Charles Penrose (then the second counselor in the First Presidency) said in General Conference:

“There still remains, I can tell by the letters I have alluded to, an idea among some of the people that Adam was and is the Almighty and Eternal God…..[T]he notion has taken hold of some of our brethren that Adam is the being that we should worship…..I am sorry that has not been rectified long ago, because plain answers have been given to brethren and sisters who write and desire to know about it, and yet it still lingers, and contentions arise in regard to it, and there should be no contentions among Latter-day Saints.” (as quoted in Buerger, 42)

Still, the Adam God doctrine didn’t die within the first two decades of the 20th century. Indeed, Spencer W. Kimball warned against believing the Adam God doctrine and even denounced it during the October 1976 General Conference. LDS Apostle Bruce McConkie continued that warning and in 1980 told students at BYU,

“There are those who believe, or say they believe, that Adam is our Father and our God, that he is the Father of our spirits and our bodies and that he is the one we worship. The devil keeps this heresy alive…anyone who has received the temple endowment and who yet believes the Adam-God theory does not deserve to be saved.” (“Seven Deadly Heresies,” as quoted in Buerger, 45)

Brigham Young believed it; and he made certain it was taught during the temple endowment ceremony.

Many early Mormon Church leaders — and members — believed what Brigham Young, the “Lion of the Lord,” declared to his Church as revelation from God. Many people (Mormon Fundamentalists) still believe it.

Jesus said, “Ye shall know them by their fruits” (Matthew 7:16). What does this fruit of Mormonism tell you?

28 Responses to A doctrine God revealed to Brigham Young