The most difficult book 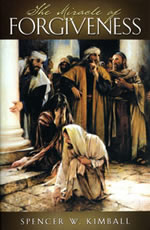 I recently discovered a new witnessing tactic. Don’t get me wrong, quoting from Spencer W. Kimball’s book The Miracle of Forgiveness has been used by Christian apologists for quite some time. But instead of just quoting this book, I decided to try to give it away, which has proven to be a very powerful tactic.

Let me back up for a second to provide a little background to this book, which remains very popular and is still sold at Deseret Book. Written by the 12th president of the LDS Church when he was an apostle, it teaches (among other things):

Attaining “forgiveness” according to Mormonism requires plenty of effort on one’s part. Those who say that Kimball’s book is no longer authoritative because the author is deceased should understand that Apostle Richard G. Scott called this a “masterly work” in a 2004 General Conference message in his encouragement to have his listeners to “study” it. Seventy Bruce H. Hafen claimed the book “reviews many sins of both commission and omission. And while forgiveness is a miracle, it is not won without penitent and strenuous effort” (Liahona, April 1997, p. 41).

Recently Randy Sweet and I collected more than a dozen used copies of Kimball’s book and decided to try a new strategy while witnessing outside the Ogden Temple open house. We put together a tract and placed a copy in each book. As dozens of temple guests walked by, I offered it to everyone, saying, “Free copy of The Miracle of Forgiveness, a book by 12th president Spencer W. Kimball. We believe every Latter-day Saint should read this book, so if you don’t have a copy, we’ll give it to you free of charge.”

In my mind, I thought a dozen copies would only last only three or four hours. After all, who could resist a complimentary copy of a $20 book? All I asked is that the person 1) didn’t already own a copy; 2 was willing to read the book; 3) would agree to email me after reading it.

We learned plenty during the first day of our experiment. First of all, offering a free LDS book that most Mormons recognize threw many for a loop. While some smirked, others had a look of disbelief, apparently wondering why I was giving away their book.

In fact, here are the unofficial results of the reaction to my spiel:

The third response was perfect. In fact, a number of these folks who said they had already read it told me so in a rather proud manner. Several even boasted that they had 2 or 3 copies, to which I jokingly responded, “Wow, and you read all of them?”

My follow-up question to those who had read it was obvious: “So are you accomplishing everything that Spencer W. Kimball said you should do?” This was the show stopper. Again, here are the unofficial responses to my question:

Bottom line, nobody can do what Kimball says must be done to attain forgiveness. Several told me that I just need to keep reading the book to the end because Kimball explains the “miracle” part of forgiveness. My response? “Here’s the book, show me the page numbers to prove your point.” Nobody ever came back to explain the very difficult passages found throughout the book.

This has proven to be a great tactic. After offering the book to literally thousands of Latter-day Saints over a twelve-day period, I gave away just over forty copies. While many Latter-day Saints walking by may have already owned it, I think that there were others whose pride would not allow them to accept a gift of a Mormon book from someone who does not belong to their church.

Let me close with a note written by “Gayla” to “Sharon” found on the inside front cover of one of our copies that we intended to give away, as I think her words are telling. Dated 3/19/76, the note reads, “I know you’ve wanted this book—I just hope you don’t need it! What are friends for if not to provide inspiration and encouragement to their peer friends so that’s why I’m in your life—if you’re tired of me you’d better get inspired and encouraged. Thanks for being my friend & remember if you need me after reading this, forget it!”

28 Responses to The most difficult book