Mormon Church does not require “bloodletting”

Last week the Utah Senate voted to reinstate death by firing squad as one of the state’s options in carrying out a judiciously imposed penalty of capital punishment. The bill awaits the signature of Utah’s governor before it can become law.

As the bill is written, the firing squad alternative would be required if lethal injection drugs are unavailable. As reported by the Los Angeles Times, Representative Paul Ray, who introduced the bill, said firing squad is “the most humane” option for capital punishment. This is a turn-around from the reasoning suggested in 2004 when Utah banned the use of firing squads. At that time, as Utah Governor Olene Walker prepared to sign the banning into law, her spokesperson said the Governor “thinks there could be some more humane ways, other than firing squad” to enforce capital punishment. 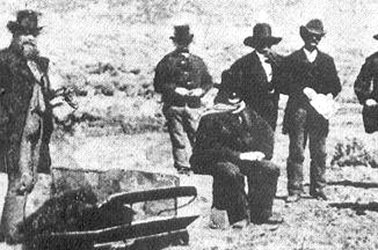 Be that as it may, death by firing squad has had a long history in Utah, having been used in 40 of 50 formal executions between 1847 and 2004. Many people think the reason Utah has so long employed this method of execution is because so many Mormons believe there are some serious sins (crimes) that can only be expiated by the shedding of the sinner’s own blood; lethal injection will not accomplish this required blood-shedding. The Times article addressed the Mormon angle while employing a Q&A format:

“Is the use of firing squads tied to Utah’s founding by Mormons?

“There has been speculation that the practice was once tied to the Mormon principle of ‘blood atonement,’ which says certain sins are so serious that people must spill their blood to make amends. Today, the Church of Jesus Christ of Latter-day Saints renounces any connection between firing squads and blood atonement.

“‘Mormons disown that idea now,’ [Richard] Dieter said. ‘They say, “We do not require bloodletting.”'”

Though the Church does not require bloodletting, some Mormons believe that under certain circumstances it is the right thing to do. Famous Mormon forger Mark Hofmann was charged in 1986 with committing two murders (and other crimes). His father, Bill Hoffman, said that if Mark was guilty, he needed to die by firing squad. As told by author Robert Lindsay,

“’If Satan got hold of you, son, and you’ve committed these acts, you should confess and ask for the firing squad so you can be with us in the next life.’

“If Mark was guilty, his father said, he must admit his guilt and be executed so that the family could be reunited in the next world. In Utah, condemned criminals were given a choice of death by lethal injection or a firing squad. To atone, Mark would have to die before a firing squad.” (A Gathering of Saints, 217)

Where did Mormons get such an idea? It appears to have started with the religion’s founder, Joseph Smith:

“In debate, George A. Smith said imprisonment was better than hanging. I replied, I was opposed to hanging even if a man kill another, I will shoot him, or cut off his head, spill his blood on the ground, and let the smoke thereof ascend up to God; and if ever I ever have the privilege of making a law on that subject, I will have it so.” (Joseph Smith, History of the Church 5:296)

This teaching was carried on by subsequent Mormon Authorities throughout much of the history of the Church.

“There are sins that men commit for which they cannot receive forgiveness in this world, or in that which is to come, and if they had their eyes open to see their true condition, they would be perfectly willing to have their blood spilt upon the ground, that the smoke thereof might ascend to heaven as an offering for their sins; and the smoking incense would atone for their sins, whereas, if such is not the case, they will stick to them and remain upon them in the spirit world. I know, when you hear my brethren telling about cutting people off from the earth, that you consider it is strong doctrine; but it is to save them, not to destroy them.” (Brigham Young, September 21, 1856, Journal of Discourses 4:53)

“Brethren and sisters, we want you to repent and forsake your sins. And you who have committed sins that cannot be forgiven through baptism, let your blood be shed, and let the smoke ascend, that the incense thereof may come up before God as an atonement for your sins, and that the sinners in Zion may be afraid.” (Jedediah M. Grant, September 21, 1856, Journal of Discourses 4:51)

“Joseph Smith taught that there were certain sins so grievous that man may commit, that they will place the transgressors beyond the power of the atonement of Christ. If these offenses are committed, then the blood of Christ will not cleanse them from their sins even though they repent. Therefore their only hope is to have their own blood shed to atone, as far as possible, in their behalf.” (Joseph Fielding Smith, Doctrines of Salvation [copyright 1954] 1:135)

“But if, as seems to be the case, from the foregoing considerations, there are certain limitations to vicarious atonement, even to the vi- carious atonement of the Christ, then these ancient laws proclaiming that the life of the flesh is in the blood, and that ‘the blood maketh an atonement for the soul,’ make plain what is needful for the salvation of the soul where one’s sins place him beyond the reach of vicarious means of salvation—then it is the shedding of the sinners own blood that must here be referred to.” (B.H. Roberts, A Comprehensive History of The Church of Jesus Christ of Latter-day Saints [copyright 1957] 4:128-129)

“As a mode of capital punishment, hanging or execution on a gallows does not comply with the law of blood atonement, for the blood is not shed.” (Bruce R. McConkie, Mormon Doctrine [copyright 1958], 314. Italics in original)

The blood atonement doctrine believed by so many Mormons may not be “official” Church doctrine, yet the idea stubbornly persists, perhaps due to the equivocal nature of statements that have come from Church leadership. A University of Utah professor noted,

“Accordingly, the doctrine asserts that those who commit certain grievous sins such as murder and covenant-breaking place themselves beyond the atoning blood of Christ, and their only hope for salvation is to have their own blood shed as an atoning sacrifice. In his writings, Joseph Smith only hinted at the doctrine, Brigham Young successively denied and asserted it, Joseph F. Smith ardently defended it, and in more recent years, Hugh B. Brown repudiated it and Joseph Fielding Smith and Bruce R. McConkie both have vigorously defended it in principle while staunchly denying that the Church has ever put it into actual practice, whereas most other General Authorities have prudently preferred to remain silent on the subject. It should be noted that the whole notion of blood atonement is so obviously linked to the Mormon literal mind-set that it does not seem to admit of a mitigated, symbolic interpretation and is either accepted or rejected outright, depending on one’s level of literalistic belief.” (“Quintessential Mormonism: Literal-Mindedness As a Way of Life,” Richard J. Cummings, Dialogue: A Journal of Mormon Thought, Vol. 15, No. 4 [Winter 1982], 93)

It is a sad truth that Mormons have not been clearly taught about the sufficiency of the atonement of Christ. According to the Bible, Jesus “is the propitiation for our sins” (1 John 2:2). And “If we confess our sins He is faithful and just to forgive us our sins, and to cleanse us from all unrighteousness” (1 John 1:9). Jesus’ sacrifice is enough — enough for us all.

20 Responses to Mormon Church does not require “bloodletting”