The annual Christian outreach at the Mormon Miracle Pageant in Manti, Utah concluded about 2 weeks ago. During this year’s outreach, 34 women, dressed in pioneer clothing, each took on the identity of a wife of Joseph Smith. This was a powerful visual representation that helped Mormons better understand what 34 wives actually looks like. Eric Johnson snapped a couple of photos of the actresses gathered together. In this one, rather than smiling for the camera, the women’s expressions reflect the discontent of their polygamous identities: 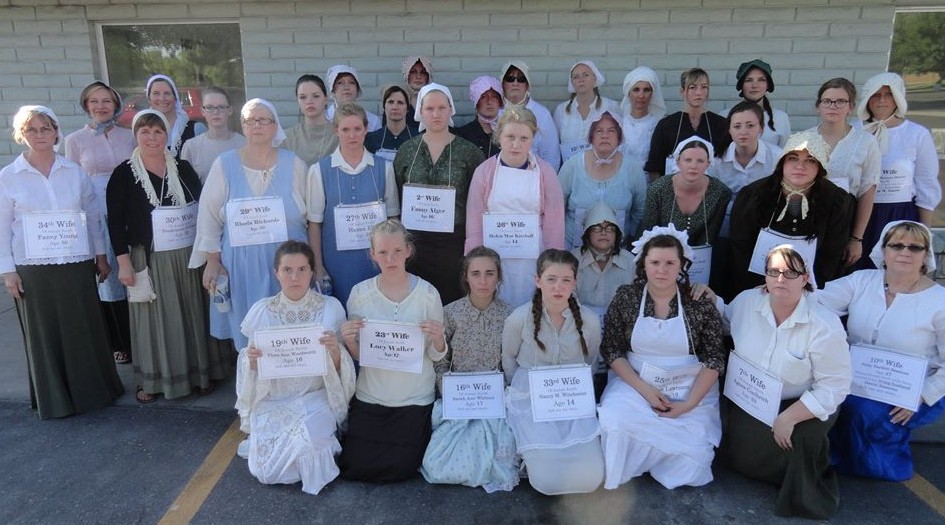 When this same visual representation was performed in Manti for the first time (in 2008), most Mormons were completely unaware that Joseph Smith had more than one wife. They reacted to the parade of 34 women with the accusation that the whole thing was nothing but a vile lie. Even though the Mormon Church itself has now published an essay that admits Joseph had up to 40 wives, many Mormons still do not know that Emma was but one of Joseph’s dozens of plural wives.

In this short (4-minute) video, Aaron names Joseph Smith’s wives and provides a few important facts about these women. This, too, is a powerful visual presentation.

For more information about Joseph Smith’s polygamy, check out this excellent video of Chip Thompson and Doris Hanson discussing and teaching on the topic. This video also presents a visual representation of Joseph Smith’s 34 wives – along with 11 additional husbands to whom Joseph’s plural wives were also married.

9 Responses to The Wives of Joseph Smith Visit Manti