Assistant BYU professor, author, and artist Anthony Sweat created the “feature image” for a new book (From Darkness Unto Light, by Michael Hubbard MacKay and Gerrit J. Dirkmaat) that depicts the translation of the Book of Mormon. His painting includes the historically accurate image of Joseph Smith preparing to gaze into a hat, where his seer stone is (presumably) housed.

In an appendix to the book, Dr. Sweat discusses the tension between art and history. The article is essentially an apologetic for the Mormon Church’s oft-criticized tradition of depicting Joseph Smith’s translation of the Book of Mormon in a historically inaccurate way. 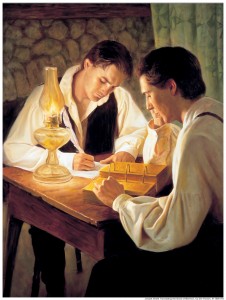 “Why don’t the renderings of the translation reflect the seer-stone(s)- in-a-hat process if that is how it happened based upon multiple historical sources? I cannot answer that question, as only those who have commissioned, created, and published the past artistic images can give an informed response. The language of art is a factor, however.” (236)

According to Dr. Sweat,

“The language of history is facts and sources (and the interpretive merits of those facts and sources), and the language of art comprises symbolic representations in line, value, color, texture, form, space, shape, and so forth (and the interpretive merits of those symbols). The tension lies in that historians, scholars, and teachers often want paintings that are historically accurate because images often shape our perceptions of history as much as, or perhaps more than, many of the scholarly works about history. …However, artists often have little to no intent of communicating historical factuality when they produce a work. Artists want to communicate an idea…” (230-231. Ellipses mine.)

Dr. Sweat uses Emanuel Leutze’s famous painting, Washington Crossing the Delaware, as an example of an inaccurate historical artistic rendering. He notes that the boat, the weather, the flag, and General Washington’s pose are all (probably) wrong, yet the artist has used his painting to communicate an important idea to viewers. So, too, have Mormon artists used their historically inaccurate renderings of the Book of Mormon translation process to communicate the ideas they wanted to communicate. Dr. Sweat quotes Mormon artist J. Kirk Richards talking about his own painting of Joseph Smith’s First Vision:

“I’ve had people talk about what the ‘correct’ clothing is [of the First Vision] and so on and so forth. In reality, I don’t care. I want it to feel what we feel when we think about the First Vision. And a lot of times historical details detract from getting that feeling across. So, very low on my list of considerations is historical detail. Sorry, historians. Don’t hate me. …I’m usually trying to present the principle of a spiritual truth rather than a historical truth.” (233. Ellipsis in original.)

“It would be hard for me to paint a painting with Joseph with his head in a hat. We would have no sense of the vision of what is happening inside.” (237) 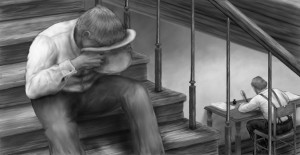 Joseph Smith Translating the Golden Plates
Images of the Restoration

As Dr. Sweat said, “it doesn’t translate well in the language of art.” Yet he managed to pull it off in his feature image, By the Gift and Power of God. He painted in an effort to communicate “inspiration…prayer, pondering, focus, reverence, and revelation” (240) while still reflecting “historical reality.” Even so, when people unfamiliar with Mormon history saw Dr. Sweat’s initial sketches, they asked if Joseph Smith was ill “because he looks like he’s vomiting into the hat” (237). Therefore,

“For past artists (or Ensign art directors) who may have known about the historical documents of the translation, it may simply be that choosing to depict Joseph with his finger in open plates with a pensive look was more visually appealing and communicative than the historical reality of what the translation may have looked like. It is easy for critics to assume a coordinate cover-up or historical rewrite when looking at the images, but the unjuicy reality may have more to do with a preference for speaking artistic language that is ‘truer’ in its communication, even if the depicted events contain historical error.” (237)

The specific critics Dr. Sweat references above are Bill McKeever and Eric Johnson, who suggested,

“What could be the reason for leaving these items out of a publicity painting except to distance the translation from the ocultic [sic] practices that really characterized the Book of Mormon translation!” (243, fn 20)

Dr. Sweat suggests the reason is the wish of the artists (or editors, etc.) to convey certain feelings and ideas that cannot be conveyed via a historically accurate illustration. A picture of Joseph Smith with his face in a hat will not communicate the ideas of revelation, inspiration, prayer, pondering – that is, the claim that Joseph Smith was receiving a revelatory gift from God. Joseph with his face buried in his hat actually communicates illness at best, perhaps occult activity at worst; neither a picture faithful Mormons want portrayed.

All his talk about the language of art notwithstanding, Dr. Sweat essentially affirms the McKeever and Johnson suggestion: the Mormon Church has portrayed the Book of Mormon translation process absent of the historical elements of hat and seer stone in order to control the impression made on viewers. The Church wants to communicate Joseph Smith as a godly man receiving revelation from God – leaving people feeling as though he were a true prophet — rather than the historically accurate picture of Joseph Smith engaged in the occult practice commonly called “scrying.”

In other words, knowing that, as Dr. Sweat says, “images often shape our perceptions of history as much as, or perhaps more than, many of the scholarly works about history,” the Mormon Church purposefully achieves a sort of “historical rewrite” of the Book of Mormon translation process by continually representing the historical event using a non-historical image that communicates a different idea – the idea that the Church wants people to embrace. The historically accurate details “detract” from the feeling generated by the Church’s faith-promoting narrative, so it changes the presentation of the details.

In his thoughtful apologetic essay, Dr. Sweat has but confirmed what the critics have been saying all along.