“A prominent local attorney, who is an elder in the Mormon Church, has been harassed, and fears for his safety and the safety of his family.

“In court documents, a witness told detectives that one goal [suspect Lee] Baker had was to kill an elder on temple grounds as a blood sacrifice.”

Last July Lee Baker was engaged in Christian outreach during the Indianapolis Indiana Mormon temple open house. It was during the outreach that he met and spoke with Paul Sinclair, as well as many other Latter-day Saints.
I don’t know Lee Baker well, but I have met him, and his wife Kathy, and I have observed him engaging in evangelism on the streets of Manti. I have heard his testimony of being brought out of Mormonism to new life in Christ. I have witnessed his expressions of love for the lost Mormon people. Nothing I have ever observed would suggest that this accusation against Mr. Baker has any foundation in truth.

But what, then? I haven’t seen the court documents to which the news story referred, which means the information I have is merely hearsay. Nevertheless, I’ve been pondering this sensational accusation against Lee Baker and wondering where it could have come from. I have a few ideas.

Perhaps it was an explanation of Mormon temple rituals that led Mr. Baker’s accuser to form such a strange idea of what Lee said. Before 1990 Mormons who participated in the LDS temple Endowment ceremony pantomimed graphic penalties of throat slitting, having their hearts torn out, and disembowelment; they agreed to be killed by these gruesome methods if they ever revealed the secrets of the temple. Perhaps Mr. Baker’s explanation of what he was required to do when he went through the temple as a Mormon was so shocking that his words were misinterpreted.

It could be that Mr. Baker was misunderstood as he discussed the doctrine of blood atonement as taught by early Mormon Church leaders. This doctrine states

“But man may commit certain grievous sins — according to his light and knowledge — that will place him beyond the reach of the atoning blood of Christ. If then he would be saved, he must make sacrifice of his own life to atone — so far as in his power lies — for that sin, for the blood of Christ alone under certain circumstances will not avail.” (Joseph Fielding Smith, Doctrines of Salvation 1:134)

“There are sins that men commit for which they cannot receive forgiveness in this world, or in that which is to come, and if they had their eyes open to see their true condition, they would be perfectly willing to have their blood spilt upon the ground, that the smoke thereof might ascend to heaven as an offering for their sins; and the smoking incense would atone for their sins…” (Brigham Young, Journal of Discourses 4:53)

“I could refer you to plenty of instances where men have been righteously slain, in order to atone for their sins. I have seen scores and hundreds of people for whom there would have been a chance (in the last resurrection there will be) if their lives had been taken and their blood spilled on the ground as a smoking incense to the Almighty…This is loving our neighbor as ourselves; if he needs help, help him; and if he wants salvation and it is necessary to spill his blood on the earth in order that he may be saved, spill it.” (Brigham Young, Journal of Discourses 4:220)

“But if the Government of God on earth, and Eternal Priesthood, with the sanction of High Heaven, in the midst of all his people, has passed sentence on certain sins when they appear in a person, has not the people of God a right to carry out that part of his law as well as any other portion of it? It is their right to baptize a sinner to save him, and it is also their right to kill a sinner to save him, when he commits those crimes that can only be atoned for by shedding his blood…We would not kill a man, of course, unless we killed him to save him.” (Jedediah Grant, Deseret News, July 27, 1854, 2)

“…if they are covenant breakers we need a place designated, where we can shed their blood… Brethren and sisters, we want you to repent and forsake your sins. And you who have committed sins that cannot be forgiven through baptism, let your blood be shed, and let the smoke ascend, that the incense thereof may come up before God as an atonement for your sins, and that the sinners in Zion may be afraid.” (Jedediah Grant, Journal of Discourses 4:50-51) 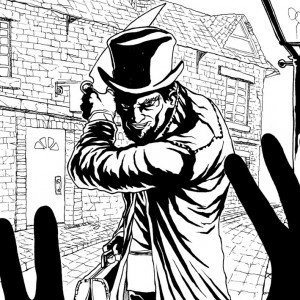 Because Mr. Baker left The Church of Jesus Christ of Latter-day Saints, Mormonism brands him a “covenant breaker.” Based of the teachings of early Mormon leaders, if anyone should fear being killed as a blood sacrifice on Mormon temple grounds, it would be Mr. Baker, not the people he is trying reach with the Gospel of Christ. Nevertheless, it’s possible that someone hearing Mr. Baker explain the early Mormon doctrine of blood atonement could have misunderstood.

“I married Jesse Hartly, knowing he was a ‘Gentile’ in fact, but he passed for a Mormon, but that made no difference with me, although I was a Mormon, because he was a noble man, and sought only the right. By being my husband, he was brought into closer contact with the members of the Church, and was thus soon enabled to learn many things about us, and about the Heads of the Church, that he did not approve, and of which I was ignorant, although I had been brought up among the Saints; and which, if known among the Gentiles, would have greatly damaged us. I do not understand all he discovered, or all he did; but they found he had written against the Church, and he was cut off, and the Prophet required as an atonement for his sins, that he should lay down his life. That he should be sacrificed in the endowment rooms; where human sacrifices are sometimes made in this way. This I never knew until my husband told me, but it is true. They kill those there who have committed sins too great to be atoned for in any other way. The Prophet says, if they submit to this he can save them; otherwise they are lost. Oh! that is horrible. But my husband refused to be sacrificed, and so set out alone for the United States: thinking there might be at least a hope of success. I told him when he left me, and left his child, that he would be killed, and so he was. William Hickman and another Danite, shot him in the canyons; and I have often since been obliged to cook for this man, when he passed this way, knowing all the while, he had killed my husband. My child soon followed after its father, and I hope to die also; for why should I live? They have brought me here [to Green River], where I wish to remain, rather than to return to Salt Lake where the murderers of my husband curse the earth, and roll in affluence unpunished.” (as told to Mary Ettie V. Smith, Mormonism: its rise, progress, and present condition, 310-311)

This is a story of an apostate Mormon elder who was killed on temple grounds (the Endowment House) as a blood sacrifice. It’s quite easy to imagine that a Mormon could hear this story and misconstrue the whole thing.

The sensational accusation against Lee Baker has more foundation in Mormonism than in evangelical Christianity. What I know about Mr. Baker is that he longs to see Mormons come into a saving relationship with Jesus Christ. And he knows that Jesus is the One who has already made the only sacrifice that can save sinners (Hebrews 7:27, 9:12, 10:10).

13 Responses to Mormonism and Blood Sacrifice