On March 31st, LDS Church-owned Deseret Book announced plans to open a new store in Nauvoo, Illinois as early as June of this year. On Sunday (April 9th) the Illinois Quincy Herald Whig carried an article about retailers in Nauvoo and how they feel about the competition.

You have to understand that Nauvoo is a very small town. The population is around 1600 residents. It’s a sleepy village most of the time, but wakes during the summer months with lots of Mormon travelers coming to town to visit the restored historic Mormon sites.

As the Quincy Herald Whig notes, Deseret Book’s plan to move into Nauvoo is not welcome news for some of the town’s businesses.

“For [LDS bookstore owner Estel] Neff and other retailers, it’s repetition of what’s already for sale in the community.

“‘Everybody in town is concerned about it. It’s only about four months of business here in this town. The businesses here for years can’t afford to lose any percentage of business at all and still exist,’ Neff said.”

Mr. Neff said Deseret Book tried to come to Nauvoo years ago, but the existing retailers were able to convince Deseret to change its plans. Though Mr. Neff and others are trying again to reason with Deseret Book, it doesn’t look like they will succeed.

“Nauvoo long has been a focus area for the LDS retailer, but finding the right location, mix of product and timing was important in launching the new 2,600-square-foot store.

“‘We believe this is the right opportunity for both Deseret Book and for the Nauvoo community,’ [Deseret Book CEO Sheri] Dew said.

“Mayor John McCarty said the building project completes Nauvoo’s main street, filling an empty lot near the temple, and brings a ‘quality store’ to the community.” 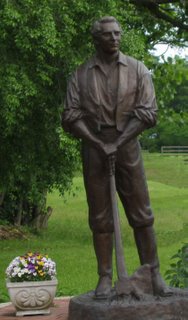 This makes it sound as if Deseret Book is doing Nauvoo a favor by building an attractive building to fill a previously empty lot on Mulholland, Nauvoo’s main street. But the lot that now supports the new building wasn’t empty. For many years it had been the site of a small memorial park honoring the Smith family. Nauvoo Legacy Gardens contained a life-size replica of a Nauvoo Temple sunstone, a bronze statue of Joseph Smith, plaques, benches, paths, and more; all in a nicely landscaped and well-kept area.

While the Mayor of Nauvoo seems to generally support the new store, he did express some concern:

“‘The only thing is most of the shops in town sell pretty much the same types of products they’ll bring in. They will be direct competition with retailers everywhere in town,’ McCarty said.

“Local retailers are the ones who weathered the tough times over the years, the slow times in the winter months. ‘It’s hard to back [Deseret Book] 100 percent when you know it hurts them,’ McCarty said.”

The three bookstores currently in Nauvoo offer products that promote and strengthen the faith of LDS members. But these stores also offer customers books that are sometimes critical of Mormonism.

Could the LDS Church–owners of Deseret Book–be trying to put the independent LDS bookstores* out of business in order to control the books available to visiting Latter-day Saints? Or are they only in it for the money?

*Please note that while two of the three Nauvoo bookstores mentioned above are owned and operated by Mormons, the proprietors of The Old, Old Path are Restorationists.