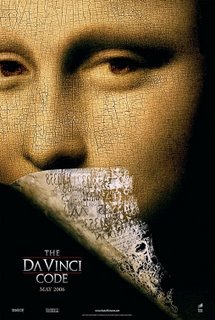 In two weeks The Da Vinci Code will open in theatres all around the world. It opens in the U.S. on Friday, May 19th. It’s been in the news, of course, for months, and it seems that everyone has an opinion about it whether they’ve read the book or not. The issues at stake in The Da Vinci Code controversy are pretty weighty. A couple of good articles about it all from a Christian perspective can be found at Christian Apologetics and Research Ministry and “Deciphering ‘The Da Vinci Code'” by Al Mohler.

What does this have to do with Mormonism, you ask? Well, last Friday’s Salt Lake Tribune carried a tongue-in-cheek column related to the story of The Da Vinci Code: “Living History: Debunking ‘Da Vinci Code’: Christ’s kin live in Utah” by Pat Bagley.

In a nutshell, Mr. Bagley’s column discredits The Da Vinci Code’s assertion that Jesus has French descendents. He writes,

“…everyone knows Joseph of Arimathea took Jesus’ children to England and, later, the descendants emigrated to Utah.

“Speaking in the Salt Lake Temple to a select group of church leaders on July 2, 1899, George Q. Cannon of The First Presidency said, ‘there are those in this audience who are descendants of the old 12 Apostles, and shall I say it, yes, descendants of the Savior himself. His seed is represented in this body of men.’

“Dan Brown’s novel assertion that Jesus was married with children is old news to Mormons, who suspected as much all along. Growing up in the church in California, I dutifully got up every morning during high school at 5:30 a.m. to attend seminary. It was there I first learned that the marriage attended by Jesus in Cana, where he famously turned water into grape juice, was probably his own.”

After giving a brief overview of non-Mormon legends that suggest Jesus sojourned with His wife and children in England following His crucifixion, Mr. Bagley writes,

“If you’re so disposed, one can further choose to see the mass British conversions to Mormonism in the 19th century as an exodus inspired by blood. Hence [George Q.] Cannon’s remarkable statement concerning divine lineage.

“So if you read The Da Vinci Code, now you know: it’s a lot of hokum. Jesus’ descendants couldn’t possibly be French.

Sharon surrendered her life to the Lord Jesus Christ in 1979. Deeply passionate about Truth, Sharon loves serving as a full-time volunteer research associate with Mormonism Research Ministry. Sharon and her husband live in Minnesota.
View all posts by Sharon Lindbloom →
This entry was posted in Jesus Christ and tagged Da Vinci Code. Bookmark the permalink.