Joseph Smith: The Prophet of the Restoration 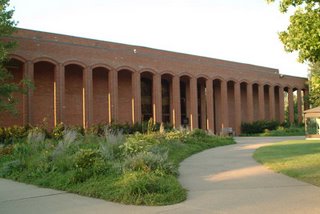 I’ve spent the last 4 days in Nauvoo, Illinois, the historic town used by the Mormon Church for faith-promotion and proselytizing. On Sunday, at the LDS Visitors Center (pictured at left), a friend and I viewed the movie, Joseph Smith: The Prophet of the Restoration. Produced as part of last year’s celebration of the 200th anniversary of Joseph Smith’s birth, this hour-long film is meant to depict the life and mission of Joseph Smith, the founder of The Church of Jesus Christ of Latter-day Saints.

As with all films produced by the Mormon Church, this one relies on manipulation of the viewers’ emotions at the expense of accurate history. I expected this; but I was surprised — and deeply offended — by the blatant near-deification of Joseph Smith. Though this comment may seem severe, it does not even begin to convey the blasphemous nature of the film’s portrayal of Joseph Smith’s life. Let me explain.

Near the beginning of the movie, during the scene of Joseph Smith’s First Vision, my friend leaned over to me and said, “Does this remind you of The Passion of the Christ?” And indeed it did. Joseph was portrayed in the Sacred Grove in torment as he prayed for wisdom. Nearly prostrate on the ground, he trembled and he sweat and he agonized as evil forces swirled around him. The scene immediately brought Christ’s struggle in the Garden of Gethsemane to mind.

As the film continued we were struck time and again by the way it portrayed Joseph’s life in seeming parallel with the life of Christ. It was almost as if the script writers had taken the story of Jesus and mapped Joseph’s life onto it. Though the details and sequence of events differed, in discussing it after the film we recalled these corresponding scenes between this portrayal of Joseph’s life and the life of Christ (listed here in no particular order):

Throughout the entire film Joseph was abused and mistreated continually; he received this treatment for no reason at all. He was portrayed as being wholly innocent and righteous in all his ways. In the words of an LDS woman, the Prophet of the Restoration was depicted as being perfectly and unreservedly “Christlike.”

After the film a Mormon missionary asked me if I liked it. When I told her I had been offended and thought the film did a grave disservice to my Lord and Savior, she replied, “I’m sorry, but it’s history.”

Of course, it’s not accurate history, but that’s not the point I’m making here. To me, the film sought to elevate Joseph Smith to the level of someone worthy — not just of reverence — but of worship. In portraying the story of Jesus Christ in the person of Joseph Smith the film crossed the line from propaganda to blasphemy.

Now that I’ve had a few days’ distance from my encounter with Joseph Smith: The Prophet of the Restoration my indignation has settled into a deep sorrow over the spiritual state of the Mormon people. They have been so conditioned that they cannot see a significant difference between Joseph Smith and Jesus Christ. They watch The Prophet of the Restoration and dab tears from their eyes — tears shed in gratitude for what the Prophet has done for them.

As I walked around Nauvoo and talked to the Mormon missionaries there I was saddened by their apparent willingness to sacrifice Christ’s offer of reconciliation with God in Him, in favor of maintaining their own love of Church and devotion to Joseph Smith. I thought of Christ’s words, “O Jerusalem, Jerusalem,…How often I wanted to gather your children together, as a hen gathers her chicks under her wings, but you were not willing!” (Matthew 23:37).

Yet even now Jesus stands at the door and knocks. If anyone hears His voice and opens the door, He “will come in to him” (Revelation 3:30). May God, in His mercy, give them ears to hear.

Sharon surrendered her life to the Lord Jesus Christ in 1979. Deeply passionate about Truth, Sharon loves serving as a full-time volunteer research associate with Mormonism Research Ministry. Sharon and her husband live in Minnesota.
View all posts by Sharon Lindbloom →
This entry was posted in Joseph Smith. Bookmark the permalink.

2 Responses to Joseph Smith: The Prophet of the Restoration