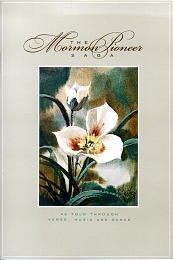 Deseret News reports on a collaborative enterprise that has just been completed:

Any way you look at it, the story of the Mormon pioneers is one of the great epics of the American West. Over the years it has been looked at in many ways: Words have been written, songs have been sung, dances have been danced.A new project sponsored by the Sons and Daughters of Utah Pioneers brings all these elements together in one heartfelt package featuring music by Robert Cundick, poetry by Edward L. Hart and dance choreographed by Virginia Tanner and Christine Ollerton.

One of the contributors to the finished product, The Mormon Pioneer Saga, is LDS musicologist Roger L. Miller. Dr. Miller was interviewed for the Deseret News article. He has an interesting perspective on history:

Looking at the pioneer story through artistic eyes is a good way to understand what it means to people — both the participants and those who share its legacy, says Miller.”The experience of any individual or group is so small compared to the overall experience. Some were burdened with all kinds of difficulties; some found an adventure, a lark.”

To try to give a picture of the pioneer experience, he says, artists often take a kind of mythic approach. “In the overall, myth is often more true than history. History can never tell the whole truth. Music, dance, poetry can say what plain words can not say.”

Dr. Miller explained that music can add “emotional depth” to words, a statement with which I heartily agree. However, I do not understand how myth can actually be “more true” than history.

Excluding stories involving the exploits of gods, the Oxford American Dictionary definition for “myth” is:

1. A traditional story;
2. A widely held but false belief or idea;
3. A misrepresentation of the truth;
4. A fictitious or imaginary person or thing;
5. An exaggerated or idealize conception of a person or thing.

In these five meanings for the word “myth,” the idea of truth is negative in four of them, and neutral in one. None of them express the idea that myth is or can be “more true” than history.

However, myth can become more true than history in the minds of the public, as is demonstrated by the legends or romanticism of the Wild West. In one myth, for instance, Billy the Kid becomes a hero rather than the pathological killer he actually was.

Another example can be found in the LDS film Joseph Smith: The Prophet of the Restoration. This film turns Joseph Smith into a larger-than-life demigod while leaving out every historical incident in Joseph’s life that portrays his imperfections. The myth of this film is definitely not more true than history, no matter how much Latter-day Saints wish it was so.

Because the LDS Church is built on the alleged historical appearance of God the Father and Jesus Christ to Joseph Smith, and LDS faith is sustained by the historical legacy of the Mormon pioneers, it’s imperative to the Church that myths be presented instead of true history. If the myths were done away there would be nothing left worthy of the members’ devotion. Perhaps then Latter-day Saints might be persuaded to shift that love and devotion to One who is worthy of it: He who is the way, the truth, and the life.