During my tour of Temple Square in Salt Lake City last week I visited the LDS North Visitors Center. A friend pointed out a large painting (reproduction) on the wall at the stairway landing. It was a painting of Jesus as a boy teaching in the temple. I found it interesting so I took a picture of it thinking you might like to see it, too (please forgive the poor quality). 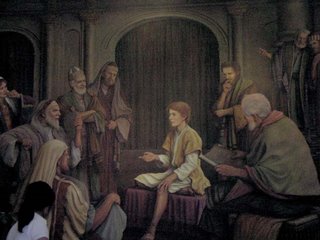 After I returned home I called the North Visitors Center to get some information about the painting. I learned the artist was David Lindsley; I emailed his studio with some questions. All of my questions weren’t answered (e.g., Is he an LDS artist?), but I was told,

The painting you saw is based on a painting by [Heinrich] Hofmann, only much larger and with a few minor changes. It was commissioned by the [LDS] church several years ago.

Indeed, there is a resemblance to Hofmann’s painting (below) in many respects: 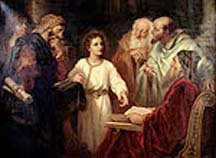 But my friend and I noticed that the way Mr. Lindsley painted the portrait of Jesus was quite different from the Hofmann depiction. Mr. Lindsley’s Jesus resembled another artistic rendering altogether. Take a look at the cover of a children’s book published in 1975 by the LDS Church: 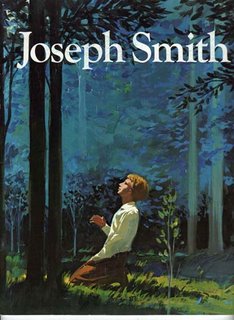 In particular, compare these close-ups of Joseph Smith and Jesus Christ as they are depicted, by or for the LDS Church, at 14 years of age and at 12 years of age respectively:

I suppose a family resemblance should be expected if the book by LDS author Vern Swanson is correct. Deseret News reports that “Dynasty of the Holy Grail — Mormonism’s Sacred Bloodline,” slated for release in September,

postulates that Mary Magdalene was an Ephraimite, while Jesus was of the tribe of Judah, and that Lucy Mack Smith, LDS founder Joseph Smith’s mother, was a direct descendant of the supposed wife of Jesus on the maternal side. Joseph Smith Sr., on the other hand, descended directly from Jesus on the paternal side, making Joseph Smith Jr. a direct descendant of Christ from both sides, one of the reasons he was chosen to restore the Church of Jesus Christ.

One Response to Artistic Interpretation–Mormon Style