Protestors at the Mormon Miracle Pageant

I’m back from a quick trip to Utah. While there I toured Temple Square, Brigham Young’s Beehive House, and the cemetery where Mr. Young and several of his wives now lay. I went to Zion’s Bookstore (which now has a nice coffee bar, by the way) and to Deseret Book. I went to the Church Administration Building and spent some time at the Church Library and Archives. Then I went to Manti, a couple of hours south of Salt Lake City, to participate in a Christian outreach at the Mormon Miracle Pageant.

The outreach continues through the end of this week, but I had to return home. The three evenings I spent on the streets of Manti were the purpose of my trip; a few dozen Christians gathered together to bring the good news of freedom in Christ to the Mormon people.

Some of the Christians carried signs announcing web site addresses (see photos). I wore a shirt with the Mormon Coffee address on front and back. Some signs quoted Bible passages. The signs were for the benefit of Mormons who did not care to engage in conversation, but perhaps wanted to know where to find information later.

Apparently, the signs struck a nerve. One evening a young man followed a Christian sign-carrier around with his own sign that said something like, “This man is a liar.com.” When asked if his web address went to a real web site, the LDS youth admitted it did not. “So,” he was asked, “who is the liar?” 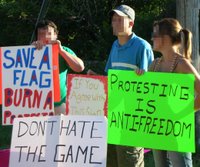 On Saturday evening a group of LDS kids from Cedar City gathered together on one street corner. They were sporting several signs directed at the “protestors” (see photos). While the views expressed on the signs may seem harsh, the kids were really just having some fun. The Christians welcomed them, took pictures, and spent time throughout the evening talking with them. 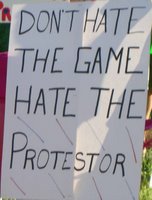 Of course, the funny thing is that the Christians were not carrying protest signs; they carried informational signs. A protestor is one who takes action expressing disapproval or objection to something. While all the Christians at the Manti outreach do disapprove of certain LDS doctrines, their signs do not express that disapproval. The only ones actually protesting on the streets of Manti were the LDS kids. Which means the sentiments on their signs were really directed at themselves. 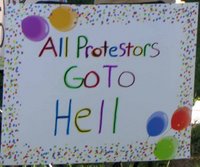 I want to go on record right now: I strongly disagree with the protest signs at the Manti Pageant. I don’t want these kids hated or sent to hell. Instead, I support the mission of the Christians who have sacrificed much to be in Manti during the pageant: Love ’em and give ’em Heaven.

Sharon surrendered her life to the Lord Jesus Christ in 1979. Deeply passionate about Truth, Sharon loves serving as a full-time volunteer research associate with Mormonism Research Ministry. Sharon and her husband live in Minnesota.
View all posts by Sharon Lindbloom →
This entry was posted in Events, Friendship, Interaction, and Evangelism and tagged Manti, Protestors. Bookmark the permalink.

One Response to Protestors at the Mormon Miracle Pageant