The Chronicle Herald of Halifax, Nova Scotia, Canada, recently ran an article about Mormon missionaries serving in that area. There have been a plethora of such articles in the past few weeks that have crossed my desk. From Canada to Australia, from Florida to the San Francisco Bay area and places in between, newspapers have been telling their readers about the Mormon missionaries walking the streets of their towns. All of the articles have been very similar in content. They talk about the missionaries’ long hours, their financial sacrifices, their limited contact with family back home (Christmas and Mother’s Day phone calls and once-a-week letters), and how apart from the fact that they are serving a mission these boys are just like any other young men — they like girls and fast cars. 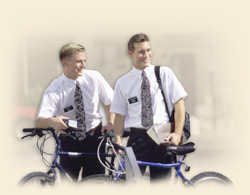 In addition to the human interest feel-good elements reported in these articles, there are two additional themes that run through them all: rejection and misperception. With but one exception, all of the dozen or so articles I’ve read make a point of mentioning “slammed doors,” “rebuffs,” “rejection,” “abuse,” and “nasty people” who “yell” and “oppose” the LDS missionaries. Also with few exceptions these reports all tell readers that Mormonism is terribly misunderstood.

The “myths” highlighted in the articles range from people thinking Mormons churn their own butter to thinking Mormons aren’t Christians; but by far the most common reported misperception encountered by the missionaries has to do with polygamy.

Apparently, although the LDS Church has received plenty of recent media coverage all over the world that sets the record straight, people persist in asking LDS missionaries about their church and polygamy. Though the majority of the recent articles about Mormon missionaries mention the misperception along with the standard LDS Church disclaimer that polygamy is a thing of the past, the ChronicleHerald article goes a bit further. Here the reader is given the reason nineteenth-century Mormons practiced polygamy:

Many people are fascinated by the early history of the polygamous Mormons, and so the elders explain. In the early days of the Mormon experience, persecution was rampant. Mormon families moved from region to region, heading West in their wagon trains and running into trouble in many places.With Mormon men dropping like flies at the hands of lynch mobs, many widows were left with young children. They often banded together with other families for protection, becoming, in essence, families with one husband and multiple wives.

Only about two per cent of church members were polygamous back then, the elders say. Those who wanted to keep the polygamy tradition left the church, breaking off into splinter sects. A few such groups remain to this day. “They give (our) church a bad name,” says Elder Bevan.

There are three historical claims made or implied here:

We might be tempted to think Elder Bevan’s claims are his alone; however, when I toured Brigham Young’s Lion House in Salt Lake City earlier this summer the sister missionary leading my tour said the same thing. Tours at official LDS sites are scripted; therefore, it seems reasonable to conclude that these historical claims are officially promoted by the LDS Church.

The question is, are the claims accurate?

The most comprehensive study to date, detailing forty 1880 Mormon towns, found that almost 40 percent of St. George households were polygamous compared to 11 percent in nearby Harrisburg/Leeds. In Rockville only 10 percent was polygamous while 67 percent of Orderville was. In South Weber, north of Salt Lake City, 5 percent practiced polygamy, compared to nearly 30 percent of Bountiful. Other studies found a 15 percent incidence in Springville, while 63 percent of Mormon men in the Mexican colonies had more than one wife. (Mormon Polygamy: A History, second edition, page 91)

Some statements have suggested that the number was as low as 3 percent, but these estimates are usually based on figures given during the Reed Smoot hearings when a lower percentage was politically advantageous to the [LDS] church. Stanley S. Ivins in his analysis estimated 15-20 percent of Mormon families in Utah were polygamous. (Ibid., page 103, footnote 1)

Regarding the second historical claim, that polygamy was necessary because there were more men than women, LDS Apostle John Widtsoe wrote:

The most common of these conjectures is that the Church, through plural marriage, sought to provide husbands for its large surplus of female members. The implied assumption in this theory, that there have been more females than male members in the Church, is not supported by existing evidence. On the contrary, there seem always to have been more males than females in the Church…The United States census records from 1850 to 1940, and all available Church records, uniformly show a preponderance of males in Utah, and in the Church. Indeed, the excess in Utah has usually been larger than for the whole United States… The theory that plural marriage was a consequence of a surplus of female Church members fails from lack of evidence. (Evidences and Reconciliations, pages 390-391)

In addition, Joseph Smith’s understanding of the reason for polygamy could not have been the same as that which the Mormon missionaries are promoting. Of the 33 documented women this founding Prophet of the LDS Church married, 11 of them had living husbands at the time they were (also) wed to Joseph Smith. (See Todd Compton, In Sacred Loneliness, The Plural Wives of Joseph Smith, pages 4-7)

Finally, the claim that Mormon men were “dropping like flies at the hands of lynch mobs” or other enemies is just plain untrue.

It is true that 17 Mormon men and boys were killed at Haun’s Mill in Missouri in 1838, many years before polygamy became a known doctrine in the LDS Church. But beyond this there is no historical data to support or even suggest widespread murder of Mormon men. Though I searched for several hours, I was unable to find any specific documentation regarding the number of Mormon deaths due to persecution in the early Church. Given the emphasis the LDS Church places on its pioneer history and persecution, it is implausible to think that an actual murderous decimation of the early Church’s male population would go unreported.

So while claiming to clarify “myths” and “misperceptions,” Mormon missionaries, as representatives of the LDS Church, merely swap one set of misconceptions for another. They tell a story far more to their liking, but in the words of LDS Apostle Widtsoe, it “fails from lack of evidence.”

(For more information on the massacre at Haun’s Mill and early violence against Mormons click here.)

Sharon surrendered her life to the Lord Jesus Christ in 1979. Deeply passionate about Truth, Sharon loves serving as a full-time volunteer research associate with Mormonism Research Ministry. Sharon and her husband live in Minnesota.
View all posts by Sharon Lindbloom →
This entry was posted in Misconceptions, Mormon Missionaries. Bookmark the permalink.