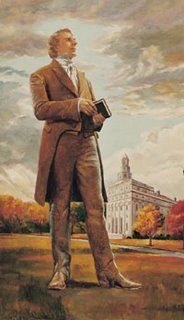 In 2004 the LDS Church brought its long-running City of Joseph pageant (Nauvoo, Illinois) to a close. In 2005 a new pageant premiered in the City of Joseph — Nauvoo Pageant: A Tribute to Joseph Smith. Along with the introduction of the new pageant, the LDS Church also offered tourists several historic vignettes which were performed at various times and locations around Nauvoo by pageant actors.

One of these vignettes was of special interest to me: King Follett Discourse. In this vignette Dallyn Bayles, the actor portraying Joseph Smith in the pageant, was to deliver portions of the famous sermon as Joseph Smith did in 1844. I went to the grove to watch and listen, bringing a copy of the King Follett Discourse text for comparison. I had expected a cleaned-up version of the sermon, with all the references to men becoming Gods and the council of the Gods (etc.) removed. I was happily surprised when Mr. Bayles did not shy away from much of the content of the sermon that is contradictory to Christianity. Though the sermon was edited for the sake of time, the true nature of the sermon was left intact. That was in 2005.

This year, 2006, I again attended the King Follett Discourse vignette. Mr. Bayles delivered a compelling performance which elicited many positive comments from the audience. Again I was surprised by the content of the sermon, but this time not happily. This time the sermon had indeed been sanitized. All of the openness of Joseph Smith’s teachings displayed in 2005 was gone.

The Prophet Joseph Smith will share portions of one of his last major discourses, a funeral sermon given in honor of Brother King Follett. In this speech the Prophet shared profound insights on the nature of God and the immortality of man.

Given this description, it’s hard to understand why the Prophet’s “profound insights on the nature of God and the immortality of man” were edited out of the sermon. For example, Mr. Bayles (as Joseph Smith) said,

It is necessary that we should understand the character and being of God. Here, then, is eternal life–to know the only wise and true God–grace to grace, exaltation to exaltation…

Now look at what was left out of this portion of the sermon.

…it is necessary that we should understand the character and being of God, and how he came to be so; for I am going to tell you how God came to be God. We have imagined and supposed that God was God from all eternity, I will refute that idea, and will take away and do away the veil, so that you may see.

These are incomprehensible ideas to some; but they are simple. It is the first principle of the Gospel to know for a certainty the character of God and to know that we may converse with him as one man converses with another, and that he was once a man like us; yea, that God himself the Father of us all, dwelt on an earth the same as Jesus Christ himself did; and I will show it from the Bible. I wish I was in a suitable place to tell it, and that I had the trump of an archangel, so that I could tell the story in such a manner that persecution would cease for ever. What did Jesus say? (Mark it, Elder Rigdon.) The Scriptures inform us that Jesus said, “As the Father hath power in himself, even so hath the Son power”–to do what? Why, what the Father did. The answer is obvious–in a manner, to lay down his body and take it up again. Jesus, what are you going to do? To lay down my life, as my Father did, and take it up again. Do you believe it? If you do not believe it, you do not believe the Bible. The Scriptures say it, and I defy all the learning and wisdom and all the combined powers of earth and hell together to refute it.

Here, then, is eternal life–to know the only wise and true God; and you have got to learn how to be Gods yourselves, and to be kings and priests to God, the same as all Gods have done before you,–namely, by going from one small degree to another, and from a small capacity to a great one,–from grace to grace, from exaltation to exaltation, until you attain to the resurrection of the dead, and are able to dwell in everlasting burnings and to sit in glory, as do those who sit enthroned in everlasting power.

Here, in this section of the discourse, are found Joseph Smith’s “profound insights on the nature of God”; but these teachings were not included in the performance. Look at a few additional omissions from Joseph Smith’s sermon:

To see scanned images of the entire King Follett Discourse from an LDS source click here.

Sharon surrendered her life to the Lord Jesus Christ in 1979. Deeply passionate about Truth, Sharon loves serving as a full-time volunteer research associate with Mormonism Research Ministry. Sharon and her husband live in Minnesota.
View all posts by Sharon Lindbloom →
This entry was posted in God the Father, King Follett Discourse, Nauvoo. Bookmark the permalink.