Yesterday the Florida Baptist Witness published an article about the recent book When Worldviews Collide by Ergun Caner. Worldviews tackles the subject of Global Apologetics and defending the Christian faith. The article states:

The Worldviews study seeks to equip Christians to “confront your culture with truth and compassion” by understanding the basic belief systems of four major world religions, as well as leading cultural philosophies.

Dr. Caner, raised in a Turkish Muslim family, converted to Christianity as a teenager in 1982. Today he is the President of Liberty Theological Seminary at Liberty University in Lynchburg, Virginia. When he talks about Islam, he knows what he’s talking about. That’s why I found the following section of the Florida Baptist Witness article really interesting.

Caner’s book not only examines where world religions came from, but also outlines ways to reach the people. He said while Islam may seem unfamiliar, it can best be described as medieval Mormonism. 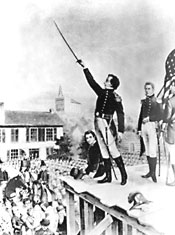 “Anything Joseph Smith (the founder of Mormonism) did, Mohammed had already done,” including believing a “corrected” version of the Bible, calling Jesus a prophet, turning salvation into a works based religion, and turning women into sexual slaves.

“Did Joseph Smith know Islam? No, but it was the same demon inspiring,” Caner said.

According to early LDS Apostle Thomas B. Marsh, Joseph Smith knew a little bit about Islam — or at least about Mohammed. In an affidavit dated October 24th, 1838 Mr. Marsh swore:

“The Prophet inculcates the notion, and it is believed by every true Mormon, that Smith’s prophecies are superior to the laws of the land. I have heard the Prophet say that he would yet tread down his enemies, and walk over their dead bodies; and if he was not let alone, he would be a second Mohammed to this generation, and that he would make it one gore of blood from the Rocky mountains to the Atlantic ocean; that like Mohammed, whose motto in treating for peace was, ‘the Alcoran or the Sword.’ So should it be eventually with us, ‘Joseph Smith or the Sword.'” (History of the Church, volume 3, page 167)

If this topic interests you, check out the 36-page booklet Joseph Smith and Muhammad by Eric Johnson available from Mormonism Research Ministry.

One Response to Medieval Mormonism