Posted on September 22, 2006 by Sharon Lindbloom

According to the LDS history web site, on this day (September 22nd) in 1827 Joseph Smith “received the golden plates from the angel Moroni on the hill where they were buried.” Eyewitnesses reported that Joseph took the gold plates home and began translating them with the help of a seer stone — that is, a stone Joseph placed in a hat and gazed at. When English words appeared on the stone, Joseph recited them to a scribe — and the Book of Mormon was born. (see David Whitmer, An Address to All Believers in Christ, page 12; see also A Comprehensive History of the Church of Jesus Christ of Latter-Day Saints, 1:129) 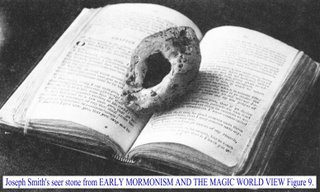 But years before the gold plates were discovered Joseph Smith used that same seer stone to find buried treasure for people who paid him for the service. In 1826 Joseph was brought before a justice to answer the charge that he was an imposter and was bilking people out of their money. (see Marquardt and Walters, Inventing Mormonism, pages 63-77) During the court proceedings Josiah Stowell, a man who had employed Joseph to find buried treasure, gave testimony.

I came across an interesting recounting of Mr. Stowell’s testimony written by Abram W. Benton, a non-Mormon who lived in the area where the pre-trial took place. Mr. Benton’s account was written in 1831 as a letter to the editors of the Evangelical Magazine and Gospel Advocate. The account is reprinted in Dan Vogel’s Early Mormon Documents, volume 4:

Josiah Stowell, a Mormonite, being sworn, testified that he positively knew that said Smith never lied to, or deceived him, and did not believe he ever tried to deceive anybody else. The following questions were then asked him, to which he made the replies annexed.Did Smith ever tell you there was money hid in a certain place which he mentioned? Yes. Did he tell you, you could find it by digging? Yes. Did you dig? Yes. Did you find any money? No. Did he not lie to you then, and deceive you? No! the money was there, but we did not get quite to it! How do you know it was there? Smith said it was! (pages 97-98)

Joseph Smith was a prophet of God. His teachings prove that what he taught was divinely inspired. (Conference Report 1899, October 13)

What did Mr. Lund mean? We can rephrase his statement like this:

In the April 2005 General Conference of the LDS Church we find these statements:

I get dizzy thinking about it.

If you are a praying person, please pray with me for all those lost in “spiritual” circular reasoning, that God would grant them eyes to see and a reasoning mind to understand.

Sharon surrendered her life to the Lord Jesus Christ in 1979. Deeply passionate about Truth, Sharon loves serving as a full-time volunteer research associate with Mormonism Research Ministry. Sharon and her husband live in Minnesota.
View all posts by Sharon Lindbloom →
This entry was posted in Book of Mormon, Joseph Smith, Mormon History. Bookmark the permalink.