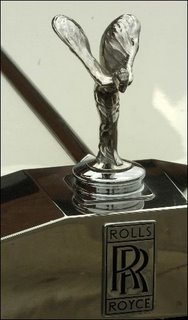 Several weeks ago, Time magazine featured a picture of a classic Rolls Royce with a cross serving as the hood ornament. The headline reads, “Does God want you to be rich?” The subhead adds, “Yes, say some meagchurches. Others call it heresy. The debate over the new gospel of wealth” (9/18/2006).

First of all, this is not a “new” gospel. This “Health and Wealth” prosperity teaching has been around for more than 40 years. Names like Hagin, Copeland, and Hinn have certainly helped popularize this idea that Christians are children of the King, with prosperity to be considered a God-given right. Remember the televangelist scandals of the 1980s that produced plenty of material for Johnny Carson jokes? Even a movie starring comedian Steve Martin (Leap of Faith) made fun of the scandalous practices that certain preachers used to fleece people of their money. I once heard a sermon where one such pastor commanded his congregation to not only pray about a Mercedes but to also have the faith to pray for its color. To do any less, he said, meant you really didn’t have the proverbial mustard seed of faith!

It’s true that, generally, God blesses His people with not only with spiritual blessings but with material blessings as well (e.g. Prov. 3:9,10). However, nowhere does the Bible say that God intends all of His people to be wealthy. As Saddleback pastor Rick Warren put it, “You don’t measure your self-worth by your net worth.” Unfortunately, God is treated by these prosperity teachers as a celestial gumball machine. Just put your quarter into the slot and out comes the giant circular prize. But God doesn’t work like that. We should follow Him and give generously, not to get something material out of it, but because we love God and desire to be a blessing to others. A person’s motive plays a crucial role here.

Why do I bring this up? Because I’m sure a number of Mormons who saw this article have conveniently stereotyped all Christians as having this same attitude. They tune into the TBN network (Trinity Broadcasting) just to mock the methods used by these prosperity teachers. (I know because one Mormon often sends me e-mails making fun of these people and showing me the “fruits” of “Evangelicalism.”)

However, many respected leaders and the people of God disagree with this prosperity doctrine. After all, it’s not hard to point to the Bible to show how such a teaching is corrupt. In 2 Timothy 3:1ff, Paul explains how “there will be terrible times in the last days. People will be lovers of themselves, lovers of money, boastful, proud,…” etc. He goes on to list more than another dozen attributes characterizing these end times, with his advice of “have nothing to do with them.”

Yes, sin and even heresy can creep into the church. The question is how will God’s people react? I, for one, reject this teaching and will have nothing to do with those who preach a “name it and claim it” prosperity doctrine. My hope is that most evangelical Christians will agree and call on these leaders to resist the temptation to preach this corrupt gospel.

6 Responses to Pass the offering plate