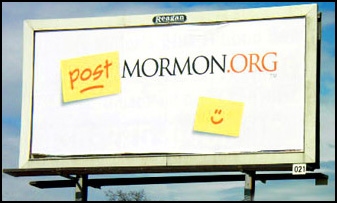 In April Mormon Coffee reported on a billboard campaign instituted in LDS areas by PostMormon.org, a group of former Mormons seeking to offer support to others who have left the LDS Church. Last Friday (22 June) the Idaho Falls’ Post Register reported on the “early termination” of the display of one of these billboards. Reproduced at the PostMormon.org web site, the article explains,

“The local advertising campaign for a Web site that caters to former members of The Church of Jesus Christ of Latter-day Saints has ended prematurely.

“A billboard on U.S. Highway 20 promoting http://www.postmormon.org was taken down more than a week before its contract expired. The decision to yank the sign came at the behest of Dome Technology Inc., a local business that owns the land where the sign’s post is buried.

“Barry South, president of the monolithic dome company and an active member of The Church of Jesus Christ of Latter-day Saints, said his sons expressed concern about the billboard to Lamar Outdoor Advertising, which owns the billboard space, after an article about postmormon.org was published two weeks ago in the Post Register.”

The executive director of PostMormon.org, Jeff Ricks, believes the actions of the South family were “a form of religious discrimination. At the very least, it’s religious intolerance.”

Dome Technology says it has a policy of neutrality that it believes the PostMormon.org billboard violates. The Post Register article states,

“Dome Technology interacts regularly with customers of diverse religious backgrounds throughout the world, the statement [provided by Dome Technologies] reads, and the company would have expressed the same concern for any advertisement with a negative or positive context toward any religious denomination.”

The PostMormon.org billboard consists of the web site’s URL and a smiley face graphic. Apparently, some people think the very idea of a happy life after Mormonism (as suggested by the billboard) places The Church of Jesus Christ of Latter-day Saints in a “negative context.” But there must be more than this concern to justify Dome’s Technology’s willingness to prompt the breaking of a contract between PostMormon.org and Lamar Outdoor Advertising.

Commenting at the PostMormon.org web site, a reader took issue with the allegation that the billboard violates Dome Technology’s policy of religious neutrality. Noting PostMormon.org is not a religion and does not promote any single religious creed, dogzilla wrote,

“This equates, IMHO, to say asking Alcoholics Anonymous to take down a billboard that advertises the resources available for people who have stopped drinking.

“At the end of the day, though, we can all smile and chuckle quietly to ourselves because the bottom line: the action that Dome Technology took just reinforces our point and our reason for having this site in the first place.”

What is it in Mormonism that creates the sort of response against an ex-member support group as was expressed in Idaho? One possibility comes to my mind, though I’m sure there are others.

Since the owners of the land where the billboard stands are LDS, perhaps they are concerned over retaining or renewing their temple recommends. In the recommend interview where an applicant is deemed worthy to enter LDS temples (or not), one question members must answer is this:

“Do you affiliate with any group or individual whose teachings or practices are contrary to or oppose those accepted by The Church of Jesus Christ of Latter-day Saints, or do you sympathize with the precepts of any such group or individual?”

The implication is that this sort of affiliation would be frowned upon and count against one’s worthiness. Hosting a billboard advertising a group which questions the claim that the LDS Church is God’s only true church might be understood to fall under the condemnation of the question cited above.

Before you dismiss this idea thinking it too far-fetched, I’ve talked with Mormons who tell me they’ve been warned by their bishops that they might not have their temple recommends renewed unless they stop attending family functions — because someone in the family is outspoken against Mormonism. If a Latter-day Saint’s temple recommend could be jeopardized by eating Thanksgiving dinner with a family member who speaks critically of the LDS Church, why wouldn’t a Mormon naturally fear his good-standing with the Church if his business indirectly supported apostates?

Sharon surrendered her life to the Lord Jesus Christ in 1979. Deeply passionate about Truth, Sharon loves serving as a full-time volunteer research associate with Mormonism Research Ministry. Sharon and her husband live in Minnesota.
View all posts by Sharon Lindbloom →
This entry was posted in Mormon Culture, Mormon Temple. Bookmark the permalink.