Just who makes up LDS doctrine?

One of the things most puzzling to me as an associate in this ministry is when I am told that I cannot truly understand the teachings of the LDS religion. Dozens of times Mormons have told me, “What you’re saying is not what we (Mormons) believe,” even though the doctrine I am describing normally comes straight from the standard works or the authoritative speeches and writings of the general authorities. What is the reason given for why my research ought to be invalidated? It’s because I’m not a Latter-day Saint, so apparently anything I say can be superseded by the opinions of those who might call themselves Mormon.

The postmodern idea that Latter-day Saints can interpret doctrine in their own way is quite common, even when these individual beliefs are contrary to the official teaching of the Mormon Church. Let it be said that I would never tell a Mormon what he or she personally believes because I don’t pretend to be omniscient. However, I think I’m capable of determining the basic idea of what Mormonism teaches, regardless of how a particular teaching might be spinned by the individual non-general authority, whether it is a professor at a church university or my next-door neighbor. 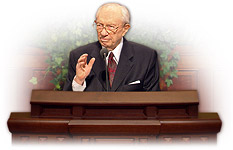 In the June 2007 Ensign, Seventy Jay Jensen and Apostle Jeffrey Holland, both of whom are LDS General Authorities, provided this exchange on page 96:

Elder Jensen: So far our discussion has concentrated on the four standard works. We do have other scripture.
Elder Holland: Yes. Do you want to say a word about the living prophets?
Elder Jensen: We do have good manuals, and we do have magazines and stories. Aren’t they powerful?
Elder Holland: We do have great material, to say nothing of the whole world of the living prophets and semiannual general conference broadcasts and publications that go to the Church. We have a wealth of the word of God available to us, and we ought to use it.

Notice what Jensen said: “We do have other scripture.” According to these GAs, the “other scripture” sources come through manuals, conference speeches, and other official church materials. Yet how often have I quoted from these sources and then been rebuffed because it’s different from what an individual Mormon might believe?

But let’s turn the tables. Why should I accept the Mormon’s individual interpretation about a particular doctrine as authoritative unless it can be fully supported by her scripture? Too often Christians let the Mormon off the hook—“after all,” we think, “she’s the Latter-day Saint and I’m not”—when the burden of proof should be placed upon individual Mormons. Let them support their beliefs by making reference to the authoritative words of the church and not just basing their ideas on feelings or what they feel is common sense. If I’m wrong, then show me; for example, did I take a particular teaching or quote out of context? But to say that I am not explaining Mormonism in an accurate manner merely because it’s different from a particular Mormon’s personal belief system is, as a friend of mine once termed it, “poppycock.”

Based on the above words of the two GAs, I don’t think it’s possible that the ideas of Mormonism belong to an esoteric postmodern camp. If so, then the only person who can truly follow this faith the way it was meant to be followed is each individual Latter-day Saint and the use of his or her own interpretation skills. If this is true, maybe the Mormon Church can save itself some time and money by no longer hosting conferences or producing its material for the membership. The church should then declare that its followers can interpret Mormonism any way they wish, just as long as they call themselves Mormons and pay their tithes.

I have a sneaking suspicion, however, that the leadership in Salt Lake City will never be willing to preach such a radical message from the conference pulpit. And think about it. Even if President Hinckley decided to turn this idea into doctrine, why should anyone accept it anyway? Quite the vicious circle, isn’t it?

This entry was posted in Authority and Doctrine, Mormon Scripture and tagged Authority, Doctrine, Postmodernism, Scripture. Bookmark the permalink.

104 Responses to Just who makes up LDS doctrine?