Obeying Orders at Mountain Meadows: Would You?

A piece on the USAToday.com website by conservative commentator Michael Medved criticizing the new film September Dawn (scheduled to be released on August 24th), has been getting much approval from the LDS community. Even Fox News chimed in with a very hastily put-together piece agreeing with Medved when he asks, “Why would Hollywood release a controversial feature film about alleged Mormon terrorists of 150 years ago while all but ignoring the dangerous Muslim terrorists of today?” Medved goes on to state, “Why frame an indictment of violent religiosity by focusing on long-ago Mormon leaders rather than contemporary Muslims who perpetrate unspeakable brutalities every day?”

Personally, I don’t see this as a pertinent issue. September Dawn is a Hollywood drama, not a documentary, and the Massacre was a real event that in less than a month will be having its 150th anniversary. The timing is understandable.

Medved showed an incredible amount of naiveté when he said, “Mormons won’t respond with any comparable rage, no matter how badly September Dawn tarnishes the memory of their faith’s founders.” One need only read the comments that followed his article to see how wrong he is. Sadly, in typical fashion, many Mormons who agreed with Medved wanted to make sure people understood that this film is just one more example of bigotry and hatred against the LDS Church. Hoping to add some thoughtful points to the discussion I wrote:

“I normally like Michael Medved’s commentary, but in this case he makes a terrible “either/or” logical fallacy. I too would like Hollywood to deal more with the Islamic terrorist problem we face, but this does not mean I’d like the rest of history to be ignored. Having studied Mormonism as an outsider for over 30 years, I can tell you that much of what we know about the Mountain Meadows Massacre is given to us by the perpetrators. Not even Mormon historians will deny that evidence has been tampered with or expunged. This could be why there is no smoking gun directly implicating Brigham Young.

The word is that a new book about the massacre by LDS historians is going to pin the order to kill the Fancher/Baker party on Isaac Haight, a Mormon stake president from Cedar City. Can we reasonably assume that around 50 devout Mormon men would kill 120 innocent men, women, and children, on the orders of a mere stake president when murder in LDS theology is an unforgivable sin? The idea is ridiculous to those who know how priesthood authority works in the LDS Church. It seems rather obvious that these men felt they would be protected, and the only man able to do that would be Brigham Young. Considering that John D. Lee was the only person to be executed for the crime, I’d say he did a pretty good job. I suggest that people interested in this topic read Will Bagley’s “Blood of the Prophets.”

In what I assume was a response to my main point, “Dr. H” wrote:

“The posts on this article show that there are plenty of people out there that would twist history to justify their hatred against people they disagree with. The new book coming out about the MMM, that clears Brigham Young and implicates Isaac Haight, shows very convincingly how it was that good Mormons, fearful of being wiped out by the US Army, would follow the orders of Haight and commit the atrocity. He was not only a stake president, but their militia commander. Regardless of the fact that everyone involved was Mormon, this was a civil militia affair, not a church doing. What started as a couple of foolish militiamen picking a fight ended as a community resorting to a murder in an ill-advised cover-up effort to prevent further agitation of the government against the Mormons.” 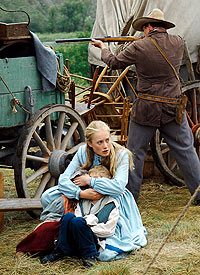 All I can say is “WOW!” Can I then assume that if Dr. H was transported back in time and fully cognizant of the “fearful” situation faced by the folks in southern Utah, that he would have followed Isaac Haight’s command to “do his duty” and put a bullet in the head of an unarmed civilian? Who cares if Haight was the militia commander? These were innocent men, women, and children they attacked and killed, not soldiers! Sidney Johnston’s army was hundreds of miles away, and like the Fancher/Baker party, posed no immediate threat. Besides, Mormons often praise General Alexander Doniphan for refusing a command by a superior officer to kill Joseph Smith. Doniphan argued that to do so would to be to kill him in “cold-blood.” What makes this so different?

I personally have no high hopes for the book coming out by the LDS Church. Like always, it is an in-house job that, like the massacre itself, comes with an oath of secrecy on the part of those involved. No outsiders were allowed to examine the information available to the three Mormon historians involved in the project. That being the case, how can any Mormon automatically assume with absolute certainty that Young was in the clear? Even Dr. H admits to a cover-up that had to obviously include Young and the rest of the LDS leadership. A common trait with people involved in cover-ups is that they lie. LDS Church historian Richard Turley himself admitted at the last Mormon History Association conference that evidence had been tampered with and was missing. How difficult would it have been for Young and others to cover their tracks given the fact that he was the most powerful man in the territory? If Mormons want to clear Brigham Young, then let them be the first to tell their church to open the archives to any and all responsible historians. It may not settle the issue once and for all, but at least it will demonstrate that the LDS Church really has nothing to hide.

I again state my premise: Can we reasonably assume that around 50 devout Mormon men would kill 120 innocent men, women, and children, on the orders of a mere stake president when murder in LDS theology is an unforgivable sin? Mormons reading this blog, I ask you, if you lived during that time, would you do that?

106 Responses to Obeying Orders at Mountain Meadows: Would You?