LDS Temples Open to All

On August 8th ABC’s Nightline posted a story about the Hill Cumorah Pageant, a Mormon drama enacted each year by LDS Church members for audiences in Palmyra, New York. The sub-title to the Nightline article reads, “In Upstate New York, Mormons Re-enact Their History and Answer Questions About the Scrutinized Faith.”

Journalists Dan Harris and Mary Marsh interviewed several people for their report. One was Latter-day Saint Boyd Tuttle, a cast member. When asked about the current media spotlight trained on the LDS Church due to Mitt Romney’s presidential campaign Mr. Tuttle said, 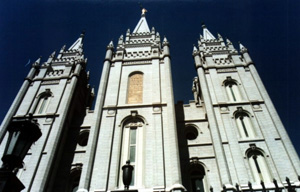 The Nightline article noted that one of the most common questions people have is about “the Mormon secret temple rituals, which still exist today.” To this Mr. Tuttle replied,

“‘The temple is a very sacred place, and we hold it in special reverence. But we also tell everybody “anyone is welcome to come to the temple if they meet the requirements. …” So it’s not closed to Mormons, or closed to non-Mormons, but it’s closed to just people who are not prepared to enter therein.'”

Here a Mormon was given an opportunity to respond to a legitimate question about the LDS Church; the answer had the stunning potential to reach thousands. Mr. Tuttle bemoaned widespread misunderstandings and misinformation often disseminated about his church, yet his comments about the secret/sacred nature of LDS temples was thoroughly misleading to an uninformed public. He made LDS temple requirements sound similar to admission prerequisites for an institution of higher education — for those with sufficient GPAs (those “prepared” to attend), there will be no discrimination based on age, disability, national origin, race, religion, gender or sexual identity. This was a spurious impression to impart.

Mr. Tuttle said straight-up that the temple is not “closed to non-Mormons.” In truth, the first requirement that must be met for entrance into a dedicated LDS temple is membership in the LDS Church. I’m certain Mr. Tuttle knows this; evidently he didn’t want the general public to know this. In an apparent effort to make the reality of restricted LDS temples more palatable to non-Mormons, he’s resorted to disseminating his own misleading information about Mormonism.

One of the early comments posted to the ABC website by a reader of this story said this:

“Thank you DAN HARRIS, MARY MARSH, and ABC. It’s refreshing to have someone ask us about our religion instead of getting the often misperseption (sic) of others.”

You see what happened here when a Latter-day Saint was asked a sincere and legitimate question about his church. This is why Mormonism Research Ministry encourages people to learn about Mormonism from many sources: members, ex-members, and non-members alike.

Sharon surrendered her life to the Lord Jesus Christ in 1979. Deeply passionate about Truth, Sharon loves serving as a full-time volunteer research associate with Mormonism Research Ministry. Sharon and her husband live in Minnesota.
View all posts by Sharon Lindbloom →
This entry was posted in Mormon Temple. Bookmark the permalink.

31 Responses to LDS Temples Open to All