When Regret is Not a Synonym with Apology 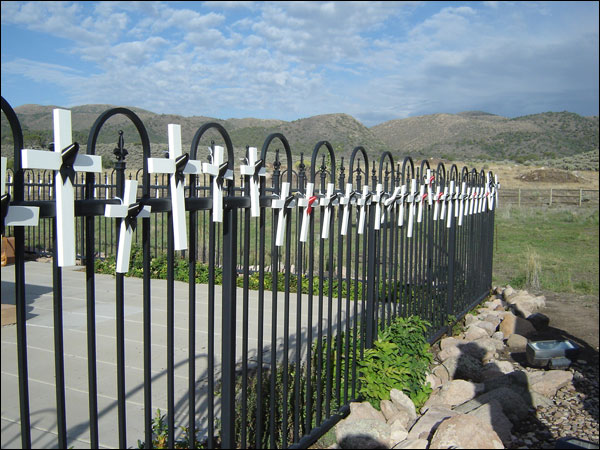 Last Tuesday I attended the memorial service commemorating the 150th anniversary of the Mountain Meadows Massacre. The day before, I had the pleasure of meeting several of the descendants of the Fancher family in Cedar City. Suffice it to say that the memorial service was a somber occasion. Short speeches were given by both descendants of the victims and the perpetrators. Several times the word forgiveness was invoked.

The service began when relatives and friends carrying large pennants walked behind a lone covered wagon down the gravel road from Dan Sill Hill to the rock cairn memorial built in 1999. Each pennant contained the last name of a family whose lives ended on this very spot. A few days prior, another service was held at the site. Here, participants had hung white crosses on the metal fence surrounding the memorial. Larger crosses represented the adults that were killed, while smaller crosses represented the many children who died that day. 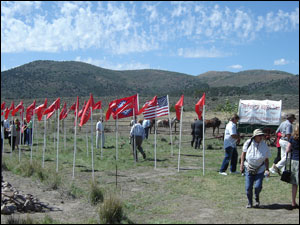 I had just returned to Salt Lake City from the memorial service, when I read the headline of an article by Carrie A. Moore in the online edition of the Deseret News. It read, “Church issues apology for massacre.” Another article written in the Salt Lake Tribune by Jessica Ravitz, was headlined, “LDS Church apologizes for Mountain Meadows Massacre.” Moore wrote that Mormon Apostle Henry B. Eyring issued “a long-awaited apology today for the massacre of an immigrant wagon train by local church members 150 years ago in southwestern Utah.” Ravitz echoed s similar conclusion when she wrote, that a Mormon Apostle, “apologized for the church’s role.” He did? I was sitting barely ten rows away from Mr. Eyring when he spoke – how did I miss that? Several speakers received standing ovations for the comments they made, but not a single person stood to applaud Eyring’s comments. Given the fact that descendants have been longing for such an announcement, I can’t imagine Mr. Eyring receiving anything less if he did, in fact, express such a message.

Instead, we heard Mr. Eyring “express profound regret” for the “undue and untold suffering experienced by the victims and their relatives.” We heard Mr. Eyring offer a “separate expression of regret” to the Paiute people “who have unjustly borne for too long the principal blame for what occurred during the massacre.”

He also made it clear that the “responsibility for the massacre lies with local leaders” of the LDS Church. In his short speech he also put in a plug for the new book being written by three LDS historians that is due to be published by Oxford Press. No doubt this book, like Mr. Eyring’s speech, will offer nothing really new about this tragic event. Why should the Church assume that this will be the definitive work on this subject? Why should the public readily accept the statements of these three Church employees, when for the past 150 years the LDS Church has shown itself to be anything but honest and cooperative when it comes to the MMM? Why not at least let qualified historians have access to all of the documents the LDS Church now keeps in its archives?

Reader responses to both the Deseret News, and Salt Lake Tribune articles were incredibly mixed. Some Mormons expressed their contempt at the descendants for making this an annual issue purposely designed to embarrass their Church. Others expressed profound joy that their Church had finally apologized to the families. A few admitted they were indeed shocked, given the fact that the LDS Church never apologizes for anything.

Having been there and hearing Eyring myself, my shock was limited primarily to the conclusion drawn by the two journalists. Regret is not always synonymous with apology, and while Eyring did appear to be emotionally moved by the circumstances, he never spoke those simple words that the descendants have wanted to hear. 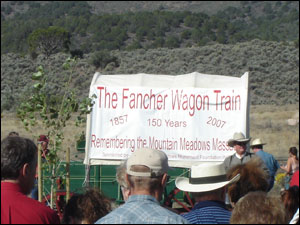 No doubt many of those Latter-day Saints who rejoiced when they read the headlines were utterly disappointed to later hear that the two journalists had drawn an incorrect conclusion. In an Associated Press article that has been circulating in several major media outlets, it stated quite clearly that “Church leaders were adamant that the statement should not be construed as an apology.” Said LDS Church spokesman, Mark Tuttle, “We don’t use the word ‘apology.’ We used ‘profound regret.'”

Such a comment speaks volumes. It not only confirms in the minds of many that the leadership continues to display a type of infallible arrogance, but it will also be understood by many that the LDS Church is not sorry for what happened under Brigham Young’s watch. For me that is the big issue. I fully understand that there is no one currently living who was personally responsible for the MMM. However, there is a corporate responsibility that the LDS leadership wants to continue to deny. Brigham Young was the “prophet, seer, and revelator” of the LDS Church and he was also the ultimate head of every LDS militia in the Utah territory. True leaders understand that when things go wrong, the “buck” has to stop somewhere, and in a real world it usually stops with those who are in charge. The LDS Church must certainly understand this concept given the huge monetary settlements paid by the LDS Church regarding child abuse cases perpetrated by Church personnel.

Furthermore, are we really expected to believe that Young’s fiery reformation speeches on blood atonement and absolute loyalty to the leadership had no affect on those same leaders? It is difficult for me to believe that his sermons were given with the intent that they should be understood only as “revival rhetoric.” Respected historian Juanita Brooks noted on page 219 of her book, The Mountain Meadows Massacre,

“while Young and George A. Smith, the church authorities chiefly responsible, did not specifically order the massacre, they did preach sermons and set up social conditions which made it possible.”

Young may not have pulled a trigger or bludgeoned a small child with a gun butt, but I find it very difficult to side with Mormons who insist that he did not play any role in this awful event.

One last thought. Mr. Eyring, towards the end of his speech, stated, that “divine justice will impose appropriate punishment” for those who carried out the massacre. Does appropriate punishment await John D. Lee, the only man who paid for this crime with his life on March 23, 1877? Lee was ex-communicated in 1870, but in 1961 the LDS Church First Presidency and Quorum of the Twelve reinstated Lee’s membership and temple blessings. I could be wrong, but I tend to think that most Mormons would see this as a reward, not a punishment.

This entry was posted in Brigham Young, Misconceptions, Mormon History. Bookmark the permalink.

73 Responses to When Regret is Not a Synonym with Apology