Men on a Mission

Posted on September 14, 2007 by Sharon Lindbloom 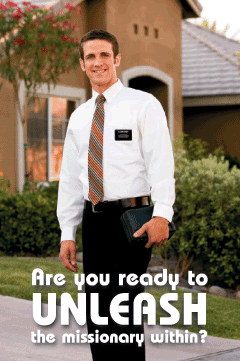 A Business Wire press release dated September 10, 2007 announces an interesting new product that its creators hope will become the “must-have stocking stuffer of the year.” Mormons Exposed is producing and selling

“a steamy 2008 calendar featuring twelve handsome returned Mormon missionaries who have dared to pose bare-chested in the first-ever Men on a Mission calendar. Usually seen riding their bicycles and preaching door-to-door, the sexy new calendar celebrates the great looks, beautiful bodies and amazing stories of service of these deeply spiritual men.”

Returned LDS missionary Chad Hardy is the calendar’s producer and co-founder of Mormons Exposed. Having been raised in a sixth generation Mormon family and having lived in Utah for eight years, Mr. Hardy understands Mormonism and Mormons. Therefore, according to the FAQ page on the Mormons Exposed web site,

“The fact that twelve young returned missionaries are posing shirtless will certainly raise eyebrows, but may also help to sort out some common misconceptions about Mormons…

“Since the veil surrounding the Mormon religion can be difficult for outsiders to permeate or to understand, the humor of the calendar is intended to help debunk common misperceptions and dispel some myths about the Mormon religion — encouraging people of every belief system to be more tolerant of one another.”

The Mormons Exposed web site contains a couple of myth-busting options. One is a Men on a Mission fan club page, which asks,

“Do you have a secret missionary crush? Or do you think one of our guys is a total stud? Simply click on the box of your favorite missionary, enter your email address and click ‘vote.’ Once you vote, you’ll start receiving our newsletter and updates on your favorite guy! (Your information will be kept strictly confidential.)”

Another is an audition page which allows men (or women?) to fill out an application for consideration to be included in a future calendar:

“We are looking for fit, great-looking returned missionaries with amazing stories to tell for the 2009 calendar. Only 12 finalists will be chosen. Do you have what it takes?”

I have to admit, the Men on a Mission calendar certainly challenges some of my perceptions regarding Mormon missionaries. I’ll bet it challenges the perceptions of the folks at the Church Administration Building, too. But an aspect of it seems like a worthy endeavor; the calendar will generate money for charities (a portion of the proceeds will be donated), and will put a fresh, lighthearted face on misperceived-as-stodgy Mormonism. These are things LDS Church leadership would certainly support.

Update July 14, 2008: On July 13, 2008 Chad Hardy, creator of the calendar, appeared before a Church disciplinary council. After Mr. Hardy explained his vision and purpose for the Men on a Mission calendars, the Church council ”still felt the calendar is inappropriate and not the image that the church wants to have,” Mr. Hardy said. After 45 minutes of deliberation, the LDS Church council decided to excommunicate Mr. Hardy.

Sharon surrendered her life to the Lord Jesus Christ in 1979. Deeply passionate about Truth, Sharon loves serving as a full-time volunteer research associate with Mormonism Research Ministry. Sharon and her husband live in Minnesota.
View all posts by Sharon Lindbloom →
This entry was posted in Mormon Culture, Mormon Missionaries. Bookmark the permalink.

135 Responses to Men on a Mission