Posted on February 27, 2008 by Sharon Lindbloom

Mormon Coffee’s short series in observance of Black History Month concludes today with a look at the man who is believed to be the first black person to ever join the LDS Church. Known only as Black Pete, this man was among the first Mormon converts in Ohio. His conversion to the LDS Church was reported in newspapers in the region in early February, 1831 (see “Mormonism’s Negro Doctrine: An Historical Overview,” Neither White Nor Black, Signature Books, 1984, p. 54).

Not much is known about Black Pete’s activity in the Church. In 1864 LDS Apostle George A. Smith made mention of Black Pete. While giving an “historical discourse,” in a section focusing on “false revelations and apostacies,” Mr. Smith said,

“There was at this time in Kirtland, a society that had undertaken to have a community of property; it has sometimes been denominated the Morley family, as there was a number of them located on a farm owned by Captain Isaac Morley. These persons had been baptized, but had not yet been instructed in relation to their duties. A false spirit entered into them, developing their singular, extravagant and wild ideas. They had a meeting at the farm, and among them was a negro known generally as Black Pete, who became a revelator. Others also manifested wonderful developments; they could see angels, and letters would come down from heaven, they said, and they would be put through wonderful unnatural distortions. Finally on one occasion, Black Pete got sight of one of those revelations carried by a black angel, he started after it, and ran off a steep wash bank twenty-five feet high, passed through a tree top into the Chagrin river beneath. He came out with a few scratches, and his ardor somewhat cooled.

“Joseph Smith came to Kirtland, and taught that people in relation to their error. …in a short time a number of those who had been influenced by those foul manifestations, apostatized. 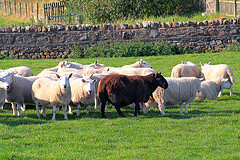 Among the number was Wycom Clark; he got a revelation that he was to be the prophet — that he was the true revelator; and himself, Northrop Sweet and four other individuals retired from the Church, and organized the ‘Pure Church of Christ,’…” (Journal of Discourses, 11:3-4)

“The Pure Church of Christ” is listed in Divergent Paths of the Restoration as the first-ever break-off group from the Mormon Church. Author and historian Newell Bringhurst suggests Black Pete may have been among those leaving the Mormon Church to follow Wycom Clark:

“…the Mormon Prophet [Joseph Smith] brought forth in February 1831 a revelation [D&C 43] condemning false revelators such as Black Pete. Smith was told that only certain individuals ‘appointed unto you’ were authorized ‘to receive revelations.’ Thereafter, several of the self appointed revelators, possibly including Pete, were ‘tried for [their] fellowship’ and ‘cut off’ from the Church.” (“Elijah Abel and the Changing Status of Blacks Within Mormonism,” Dialogue, vol. 12, no. 2, Summer 1979, p. 25)

In the same Dialogue article Professor Bringhurst provides a recollection from an unnamed person that “Pete ‘wanted to marry a white woman’ but Joseph Smith could not get any ‘revelations’ for him to do so.”

Nothing more is known about the LDS membership of Black Pete, the first African-American Mormon.

For more information see part two of Curse of Cain? Racism in the Mormon Church by Jerald and Sandra Tanner.

10 Responses to Black Pete the Revelator