Did the Mormon Church ever discriminate against black people? 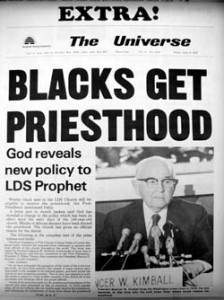 Jason Horowitz of The Washington Post explored “The Genesis of a church’s stand on race” on Tuesday (2/28/12). Looking at the long-standing Mormon Church’s “ban on blacks in the priesthood,” which came to an end via revelation in 1978, Mr. Horowitz investigated the origins of the ban. He writes:

“More than three decades later [after the lifting of the ban], the church says it still doesn’t know where the ban came from.

“‘Though the origins of the priesthood restriction are unclear, it was understood that a change would require revelation,’ said church spokesman Michael Purdy, who called the lifting of the ban ‘a day of great rejoicing’ that led to ‘robust growth in Africa and racially diverse areas of the United States and Latin America.’”

Though the origins of the priesthood ban may be “unclear,” Mr. Horowitz spoke with someone who offered a suggestion:

“In his office, religion professor Randy Bott explains a possible theological underpinning of the ban. According to Mormon scriptures, the descendants of Cain, who slew his brother Abel, ‘were black.’ One of Cain’s descendants was Egyptus, a woman Mormons believe was the namesake of Egypt. She married Ham, whose descendants were themselves cursed and, in the view of many Mormons, barred from the priesthood by his father, Noah. Bott points to the Mormon holy text, the Book of Abraham, as suggesting that all of the descendents of Ham and Egyptus were thus black and barred from the priesthood.”

But Professor Bott does not believe withholding the priesthood from this race of people was “discrimination.”

“’God has always been discriminatory’ when it comes to whom he grants the authority of the priesthood, argues Bott, the BYU theologian. He quotes Mormon scripture which argues that the Lord gives to people ‘all that he seeth fit.’ Bott compares blacks to a young child prematurely asking for the keys to her father’s car, and explains that similarly until 1978, the Lord determined that blacks were not yet ready for the priesthood.

“’What is discrimination?’ Bott asks. ‘I think that is keeping something from somebody that would be a benefit for them, right? But what if it wouldn’t have been a benefit to them?’ Bott argues that the denial of the priesthood to blacks on earth — though not in the afterlife — protected them from the lowest rungs of hell reserved for people who abuse their priesthood powers. ‘You couldn’t fall off the top of the ladder because you weren’t on the top of the ladder. So, in reality the blacks not having the priesthood was the greatest blessing God could give them.’”

This leaves me speechless. I hereby relinquish the floor to you, readers.

“Woe to those who call evil good and good evil,
who put darkness for light and light for darkness,
who put bitter for sweet and sweet for bitter!”
-Isaiah 5:20-

Sharon surrendered her life to the Lord Jesus Christ in 1979. Deeply passionate about Truth, Sharon loves serving as a full-time volunteer research associate with Mormonism Research Ministry. Sharon and her husband live in Minnesota.
View all posts by Sharon Lindbloom →
This entry was posted in Mormon History and tagged Priesthood, Racism. Bookmark the permalink.

55 Responses to Did the Mormon Church ever discriminate against black people?