Posted on February 11, 2008 by Sharon Lindbloom

February is Black History Month. In the United States, the observance is primarily a remembrance of the important people and events in African-American history.

On February 7 (2008) a Black History Month symposium lecturer at BYU suggested that the “Atonement is [the] Key to Quiet Misgivings” people may have about the Mormon Church’s previous ban on Blacks holding the LDS Priesthood. The ban was lifted in 1978, but, according to an article at the BYU News Net web site, speaker Ahmad S. Corbitt’s experience indicates that “the former priesthood restriction is the most referenced reason for discontinued activity in the church by African Americans.”

“The first step to building on the Atonement is recognition of each person’s true identity in relation to God, he said.

“‘Designations of our identities in relation to God are clearly first in rank and greatest in importance among all of our identifiers, because they most relate to our primary purpose in this life,’ Corbitt said. ‘Earthly cultural and societal designations, by contrast, are obviously secondary.’

“Corbitt cautioned students not to allow these secondary race-related concerns to violate primary principles that affect their relationship to God, not to ‘place the things of man higher than the things of God.’

“He also encouraged listeners to make the study of the Atonement a priority in their lives, and help others to do the same. Study must be balanced and mainly focused on subjects that are essential to salvation, Corbitt said.” 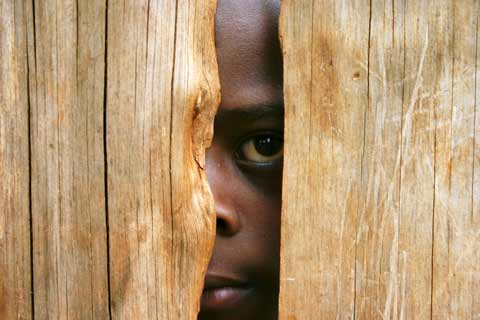 Mr. Corbitt has overlooked some significant issues related to the former priesthood ban. He makes the point that one thing of great importance in quieting misgivings about the priesthood ban is understanding our true identities in relation to God. According to LDS President John Taylor, a man who allegedly spoke for God, the true identity of a person of African descent is as an earthly representative of the devil:

“And after the flood we are told that the curse that had been pronounced upon Cain [as evidenced by black skin] was continued through Ham’s wife, as he had married a wife of that seed. And why did it pass through the flood? Because it was necessary that the devil should have a representation upon the earth as well as God.” (Journal of Discourses 22:304)

As pertaining to priesthood/race restrictions in the LDS Church, it is impossible to classify the related teachings of LDS prophets and apostles throughout history as “secondary race-related concerns” of “earthly cultural and societal designations,” because they are 100% spiritual in nature. The Book of Mormon and the Pearl of Great Price both teach that dark skin is God’s way of marking people who are spiritually inferior (see 1 Nephi 12:23; 2 Nephi 5:21; 3 Nephi 2:14-16; Mormon 5:15; Moses 7:8, 22).

Furthermore, Mr. Corbitt suggests that as students make the study of the Atonement a priority and thereby quiet their misgivings, they should focus on subjects that are essential to salvation. Though people of African descent today have full access to things essential to their salvation as taught and required by the LDS Church, this has not always been so. The former priesthood ban denied Blacks the opportunity to receive essential temple ordinances –ordinances which were (and are) required for their attainment of the fullness of LDS salvation (exaltation). As LDS apostle Mark E. Petersen taught in 1954,

“If that Negro is faithful all his days, he can and will enter the celestial kingdom. He will go there as a servant, but he will get a celestial resurrection.” (Race Problems as they Affect the Church)

Though claiming spiritual authority and the right to receive special revelation from God, these LDS leaders certainly did not reflect the pronouncements of God as found in the Bible. There we learn of the spiritual equality of all people in Christ. Paul taught,

“…there is not Greek and Jew, circumcised and uncircumcised, barbarian, Scythian, slave, free; but Christ is all, and in all.” (Colossians 3:11)

“There is neither Jew nor Greek, there is neither slave nor free, there is no male and female, for you are all one in Christ Jesus. And if you are Christ’s, then you are Abraham’s offspring, heirs according to promise.” (Galatians 3:28-29)

God has never placed any restrictions on who may receive full and complete salvation. Through His true apostle He tells us,

“’The word is near you, in your mouth and in your heart’ (that is, the word of faith that we proclaim); because, if you confess with your mouth that Jesus is Lord and believe in your heart that God raised him from the dead, you will be saved. For with the heart one believes and is justified, and with the mouth one confesses and is saved. For the Scripture says, ‘Everyone who believes in him will not be put to shame.’ For there is no distinction between Jew and Greek; for the same Lord is Lord of all, bestowing his riches on all who call on him. For ‘everyone who calls on the name of the Lord will be saved.‘” (Romans 10:8-13)

Teachings and practices contrary to the revealed Word of God, such as those taught by authoritative LDS leaders regarding the African race, should unsettle people to a much greater degree than to merely cause “quiet misgivings.”

May we be so deeply troubled by the teachings of false prophets and false apostles that we turn to the One who freely bestows His abundant riches, without racial distinction, to all who call upon His holy name.

For more information please see Black Skin and the Seed of Cain by Bill McKeever.