Posted on February 8, 2008 by Sharon Lindbloom

In January Deseret News ran a story titled, “LDS Church terms no longer in use.” The article listed some of the old names and abbreviations the Church once used, but which have become outdated as the Church has made changes. For example, 10- and 11-year-old girls in Primary used to be called Bluebirds. Their boy counterparts were Trekkers. The Sunday School program was once known as Deseret Sunday School Union, and the Ensign magazine was once the Improvement Era.

This article started me thinking about some of the other names and terms once used within the LDS Church that have changed. Here are a few: 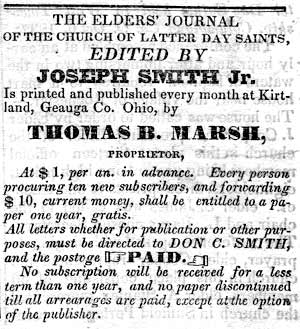 The Angel Nephi. Joseph Smith’s official testimony states that an angel named Moroni appeared to Joseph in 1823 and subsequently led him to the gold plates which were eventually translated and published as the Book of Mormon. However, as this testimony is found in the 1851 Pearl of Great Price (page 41) and volume 3 (page 753) of the Mormon periodical Times and Seasons (April 15, 1842), it was reported that Nephi, not Moroni, appeared to Joseph Smith.

White and delightsome. This phrase was previously found in the Book of Mormon, in 2 Nephi 30:6. It was part of a passage that taught that if dark-skinned Lamanites came to believe in the Book of Mormon, their dark skin would fade and they would become a “white and delightsome” people. Spencer W. Kimball, who became the twelfth LDS Prophet, was fond of using this phrase. During the October 1960 General Conference of the LDS Church he said,

“The day of the Lamanites is nigh. For years they have been growing delightsome, and they are now becoming white and delightsome. In this picture of the twenty Lamanite missionaries, fifteen of the twenty were as light as Anglos; five were darker but equally delightsome. The children in the home placement program in Utah are often lighter than their brothers and sisters in the hogans on the reservation.

“At one meeting a father and mother and their sixteen-year-old daughter were present, the little member girl–sixteen–sitting between the dark father and mother, and it was evident she was several shades lighter than her parents–on the same reservation, in the same hogan, subject to the same sun and wind and weather. There was a doctor in a Utah city who for two years had had an Indian boy in his home who stated that he was some shades lighter than the younger brother just coming into the program from the reservation. These young members of the Church are changing to whiteness and to delightsomeness.” (Conference Report, October 1960, 34)