Images of the Restoration

Images of the Restoration is a really interesting blog site for those interested in Mormon history. Currently, the site includes 10 drawings that represent different aspects of the foundational history of the LDS Church with documented historical accounts accompanying each image. Some of the topics included are Oliver Cowdery’s gift of using a divining rod, Joseph Smith translating the Book of Mormon, the nine First Vision accounts, and the final hours at Carthage Jail (pictured below).

The creators of the site explain,

“Many interesting and informative events in the development of Mormonism have never been depicted in visual art, and remain concealed in big, dry history books. This site represents an attempt to bring some of these events to light. Hopefully, after viewing these images, those history books won’t seem so big or dry anymore.

“Many other important facts and events in the development of Mormonism have appeared in Mormon art, but some have been depicted in ways that are materially inaccurate and misleading. This is a place to find Mormon art that is as true as possible to the historical record.”

Consequently, the depiction of the Prophet and his friends in Carthage Jail is unlike anything we might find in any official LDS portrayal of the event. The description of the image given at Images of the Restoration begins:

“Joseph and Hyrum Smith were murdered in a gunfight in the late afternoon of June 27, 1844. This drawing depicts the hours immediately before that gunfight, which Joseph, Hyrum, John Taylor, and Willard Richards spent smoking, drinking, and singing to lighten their mood.”

This description is followed by several supportive quotes from History of the Church and one from William Clayton’s Journal. 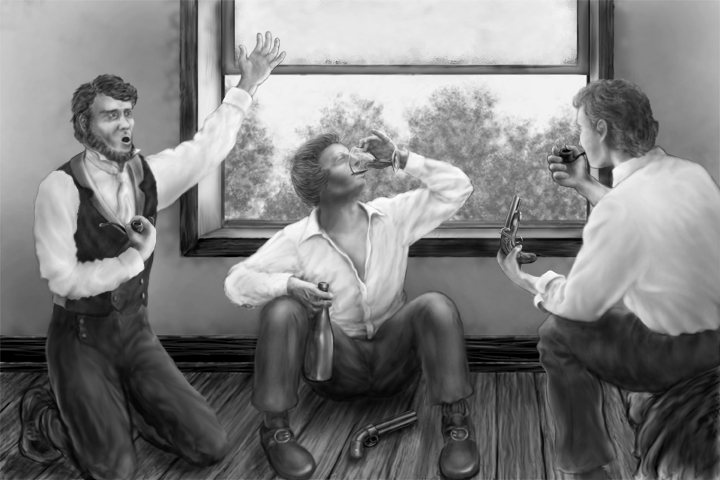 As might be anticipated, many Mormons do not like the Images of the Restoration site. Here are a few comments as reported in a February 2008 Beliefnet News article:

Interesting comments, especially in light of the fact that the “anti-Mormon activists” and “antagonists” who created the images and the blog site are Latter-day Saints.

This raises the question: What, exactly, constitutes being “anti-Mormon”? It seems that here, among these LDS people quoted, “anti-Mormon” is synonymous with a truthful presentation of LDS history. Which, for me, raises yet another question.

A new LDS Church History Library is currently under construction in downtown Salt Lake City. Speaking of the extensive collection of documents that will be housed in the Library, Church historian and member of the Seventy Marlin K. Jensen said,

” These documents are the crown jewels of Mormonism. The truthfulness of Mormonism is inextricably tied to its history, and it is in our best interest to preserve these records and make them available to those who wish to study the origins of this remarkable faith.”

My question: Will the new Church History Library be “anti-Mormon”? Or will it instead portray a perhaps inaccurate but faith-promoting view of Mormon history?

Sharon surrendered her life to the Lord Jesus Christ in 1979. Deeply passionate about Truth, Sharon loves serving as a full-time volunteer research associate with Mormonism Research Ministry. Sharon and her husband live in Minnesota.
View all posts by Sharon Lindbloom →
This entry was posted in Early Mormonism, Mormon History and tagged Anti-Mormon. Bookmark the permalink.

13 Responses to Images of the Restoration