On the MormonMentality blog, esodhiambo asked readers to make a list of the “least influential Mormons of the Twentieth Century.” A couple of readers took this to mean the “person least influential on 20th century LDS-ism” and named Joseph Smith. One reader wrote,

“I second [the] nomination of the Prophet Joseph. No one’s name gets mentioned more whose thoughts and contributions get ignored so much.”

It’s an interesting idea. If we were making a list, I think we might include the names of at least the first five LDS prophets as those whose doctrines are often considered irrelevant in Mormonism today. A number of their significant teachings have fallen by the wayside. Like seeds that fell on rocky ground, the doctrines endured for a while; but when tribulation or persecution arose because of them, the Saints quickly swept the teachings under a rug (please pardon my mixed metaphors) [see Matthew 13:20-21]. This is not to say that the doctrines have necessarily been abandoned; they might not be spoken of very often, but they have never been formally denounced. 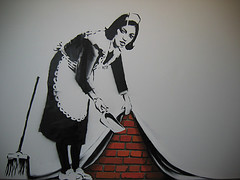 I’ll list one largely ignored teaching from each of the first five LDS prophets. Please feel free to add to the list.

Joseph Smith: “We shall, in this lecture speak of the Godhead: we mean the Father, Son and Holy Spirit. There are two personages who constitute the great, matchless, governing and supreme power over all things– …They are the Father and the Son: The Father being a personage of spirit, …The Son, …a personage of tabernacle, …possessing the same mind with the Father, which mind is the Holy Spirit…” (Lectures on Faith, Lecture Fifth)

Brigham Young: “Now hear it, O inhabitants of the earth, Jew and Gentile, Saint and sinner! When our father Adam came into the garden of Eden, he came into it with a celestial body, and brought Eve, one of his wives, with him. He helped to make and organize this world. He is MICHAEL, the Archangel, the ANCIENT OF DAYS! about whom holy men have written and spoken–HE is our FATHER and our GOD, and the only God with whom WE have to do. Every man upon the earth, professing Christians or non-professing, must hear it, and will know it sooner or later.” (Journal of Discourses 1:50-51; caps and italics retained from the original)

John Taylor: “Why is it, in fact, that we should have a devil? Why did not the Lord kill him long ago? …He needed the devil and great many of those who do his bidding just to keep men straight, that we may learn to place our dependence upon God, …When he destroyed the inhabitants of the antediluvian world, he suffered a descendant of Cain to come through the flood in order that [the devil] might be properly represented upon the earth.” (Journal of Discourses 23:336)

Wilford Woodruff: “If there was a point where man in his progression could not proceed any farther, the very idea would throw a gloom over every intelligent and reflecting mind. God himself is increasing and progressing in knowledge, power, and dominion, and will do so, worlds without end. It is just so with us.” (Journal of Discourses 6:120)

Lorenzo Snow: “As man now is, God once was: As God now is, man may be.” (quoted in Latter-day Prophets Speak, Daniel H. Ludlow, ed., Bookcraft, 71)

Sharon surrendered her life to the Lord Jesus Christ in 1979. Deeply passionate about Truth, Sharon loves serving as a full-time volunteer research associate with Mormonism Research Ministry. Sharon and her husband live in Minnesota.
View all posts by Sharon Lindbloom →
This entry was posted in Early Mormonism. Bookmark the permalink.