On a recent trip through Iowa I stopped at the Polk City Cemetery, where early Latter-day Saint leader John C. Bennett is buried. 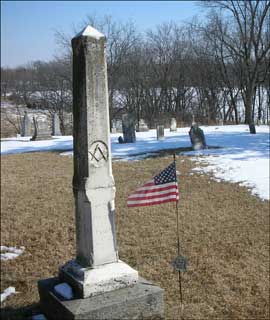 Bennett joined the LDS Church in Nauvoo, during the summer of 1840. He quickly became a very close friend and confidante of Joseph Smith. Joseph received a revelation on January 19, 1841, which made mention of John C. Bennett. Recorded in Doctrine and Covenants 124, the revelation says,

“And for his [Bennett’s] love he shall be great, for he shall be mine if he do this, saith the Lord. I have seen the work which he hath done, which I accept if he continue, and will crown him with blessings and great glory.” (D&C 124:17)

Two weeks later (February 1, 1841) John C. Bennett became the mayor of Nauvoo. On April 8th he became the “Assistant President” of the LDS Church, taking over the office for Sidney Rigdon, who was ill, until such a time as Rigdon could resume his responsibilities.

In the first part of July 1841 Joseph Smith received a letter from his brother Hyrum and William Law, who were then in Pennsylvania. They had discovered that John C. Bennett was not as he appeared. Providentially coming into contact with a man from Bennett’s old neighborhood, they learned Bennett had a wife and children who had left Bennett due to his “ill treatment” of them. (History of the Church 5:37)

When Joseph confronted Bennett with this allegation, Bennett confessed it was true. Nevertheless, he continued in favor with the Prophet and in leadership in the Church for another year, though this season was not without controversy.

Rumors of seducing women under the guise of “spiritual wifery” dogged Bennett. He was believed to offer medical services as an abortionist to LDS women with unwanted pregnancies. He seemed to view plural marriage as something to be engaged in for his own gratification rather than as a holy calling. Yet he was allowed to continue as a “faithful” Latter-day Saint until, according to biographer Fawn Brodie, Bennett and the Prophet set their affections on the same young woman (19-year-old Nancy Rigdon).

Bennett was formally excommunicated from the LDS Church on June 23, 1842. He became a bitter enemy of Joseph and the Saints, publishing exposes of scandalous Mormon behavior in Nauvoo.

John C. Bennett reaped consequences for being a traitor. From the Journal of Aroet Lucious Hale, a young Mormon living in Nauvoo at the time:

“The Prophet Joseph predicted a curse on John C. Bennett. He told him if he did not repent of his sins and sin no more, the curse of God Almighty would rest upon him, that he would die a vagabond upon the face of the earth, without friends to buy [bury] him. He told him that he stunk of women. In the year 1850, President Young was speaking about the matter. He said that he had watched the life of John C. Bennett. Bennett went to California in the great gold fever excitement, that Bennett died in one of the lowest slums of California, that he was dragged out with his boots on, put into a cart, hauled off, and dumped into a hole, a rotten mass of corruption. This prediction or prophecy came to pass as well as many others that I heard the Prophet Joseph make.”

I was surprised, then, to find John C. Bennett buried in Polk City, Iowa. His grave is situated in a beautiful spot atop a hill overlooking a tranquil lake. His tombstone is one of the largest in the cemetery. A flag honoring his service as a surgeon in the Union army sits beside his grave. It is reported that he was well respected by his Polk City neighbors and was “well-off” when he died. He was known in Iowa for practicing medicine, breeding chickens and cattle, and promoting anti-slavery issues.

“Bennett lived to be despised by all who knew him. “For some years before his death he suffered from violent fits; he also partly lost the use of his limbs and of his tongue, and it was difficult for him to make himself understood. He dragged out a miserable existence, without a person scarcely to take the least interest in his fate, and died without a soul to mourn his departure”

It is believed that John C. Bennett suffered a stroke and its aftermath. He lingered with a protracted illness until his death in 1867 at the age of 64. His second wife, Sarah, died about a year later and is buried beside him. Bennett’s reputation as a Mormon was deplorable; but in Polk City, Iowa, they named a street after him.

Sharon surrendered her life to the Lord Jesus Christ in 1979. Deeply passionate about Truth, Sharon loves serving as a full-time volunteer research associate with Mormonism Research Ministry. Sharon and her husband live in Minnesota.
View all posts by Sharon Lindbloom →
This entry was posted in Early Mormonism and tagged John C. Bennett. Bookmark the permalink.