On April 10, 2008 the Reuters blog, FaithWorld, discussed the “fundamental” PR problem the LDS Church is facing these days with the shakedown at the Fundamentalist Church of Jesus Christ of Latter Day Saints’ YFZ Ranch in Texas. Blogger Ed Stoddard wrote somewhat sympathetically about the unfortunate “polygamous Mormon” stereotype being perpetuated among an undiscerning public. The general trend is to recognize no distinction between LDS Mormons and FLDS Mormons; to most people there is no difference.

I agree that this misunderstanding is unfortunate. Mormonism (and Fundamentalist Mormonism) should be evaluated based on what it actually is, not what it is perceived to be. I think most Mormons would agree with me in theory, yet in defending their Church their declarations sometimes rely primarily on faith-promoting perceptions. Consider this comment left by a reader of the Reuters blog: 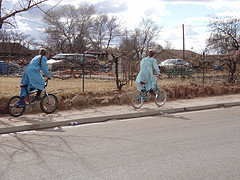 “When I hear about these psycho polygamist sects making national news and the news agencies referring to them as ‘Mormons’ and ‘followers of Joseph Smith,’ it just makes me sick. These people are about as much followers of Joseph Smith as terrorists are followers of the Muslim faith! There practices are considered apostate and evil, and anyone who abuses a child, in OUR faith, is worthy of death (subject to the laws of the land, which we put before our own laws). Oh, how I wish people would search out the truth about us instead of believing what they hear from whoever they hear it from.”

This Mormon’s perception is that Fundamentalists have nothing to do with Mormonism’s founding prophet. He doesn’t seem to realize that the polygamists do follow the teachings of Joseph Smith, though they do not follow the marital teachings of later LDS prophets, from Wilford Woodruff on. The Mormon commenter calls the Fundamentalists “psycho” polygamists whose practices are “apostate and evil” and says anyone who abuses a child is worthy of death. But Joseph Smith himself engaged in marriage to young girls, sometimes resorting to threats and manipulation in an effort to secure them as plural wives.

Another interesting comment on the issue is found in a reader’s response to an article in Deseret News:

“I am LDS in Texas. FLDS, and all others who practice polygamy in Texas, Utah, or wherever, are nothing more than pedophiles and slavers who use laws protecting religious freedom to get away with it.”

This Latter-day Saint’s faith-promoting perception is like that of the Mormon quoted earlier. She does not seem to recognize similarities between FLDS polygamy and polygamy in the early days of her own Church. If these modern day polygamists — practicing The Principle for the very reasons Joseph Smith and Brigham Young claimed God required plural marriage — are “pedophiles and slavers”, what does that make the founders of her faith? How were they any different? She might argue that they were commanded by God to do what they did, but the FLDS members believe they are obeying God as well.

Certainly the parallels between Joseph Smith and Warren Jeffs’ FLDS teaching and behavior are not exact, but history confirms that the FLDS understanding of God’s requirements for exaltation are more closely aligned with Joseph Smith and early Mormonism than are the doctrines of today’s LDS Church. While ignoring this truth might be a welcome faith-promoting perception for Mormons, it causes me to echo the commenter on the Reuters blog: “Oh, how I wish people would search out the truth about [Mormonism] instead of believing what they hear from whoever they hear it from.”

Sharon surrendered her life to the Lord Jesus Christ in 1979. Deeply passionate about Truth, Sharon loves serving as a full-time volunteer research associate with Mormonism Research Ministry. Sharon and her husband live in Minnesota.
View all posts by Sharon Lindbloom →
This entry was posted in Marriage and Singlehood, Misconceptions. Bookmark the permalink.