I would imagine that my reaction and thoughts were the same as most who are not members of the LDS Church when opening up The Book of Abraham for the first time: fascination and curiosity. Even Mormons might have the same reaction if they were converts to the Church and then discovered The Book of Abraham themselves for the first time. I would venture to say that the reaction of either of these groups would pale in comparison to the reaction of Mormons when Michael Chandler rode into Kirtland, Ohio on July 3, 1835. His wagon cart contained four Egyptian mummies with papyri. Joseph Smith desired to have these artifacts and some Mormons gave Chandler $2,400 for them. That was a large sum of money back then. I wonder what the equivalent would be today?

Joseph Smith made bold claims about the papyri parchments. He stated that these were the writings of Abraham while he was living in Egypt. He further explained that these were written by hand by Abraham himself! Smith claimed that he could translate the Egyptian language, a language practically unknown in America at the time. This wasn’t the first time Smith claimed the supernatural ability to translate an Egyptian-based language:  The Book of Mormon was supposedly written originally in “Reformed Egyptian”.

“The remainder of this month, I was continually engaged in translating an alphabet to the Book of Abraham, and arranging a grammar of the Egyptian language as practiced by the ancients” (Documented History of the Church 2:238)

After Joseph’s death, Emma Smith remarried a man named Lewis Bidamon. The scrolls that belonged to Joseph Smith were sold and thought to be lost until they were rediscovered in New York over 100 years later. A certification letter from Emma was found with the parchments verifying that they were the property of Joseph Smith.

“In 1966, Dr. Aziz S. Atiya of the Metropolitan Museum of Art in New York, discovered papyri known to have been used by the Prophet Joseph Smith in producing the Book of Abraham.” (Improvement Era, January 1968, p. 12)

With this discovery one can only imagine again what excitement was taking place in the Mormon community. Could this finally be the proof that the LDS Church had been looking for to validate their founding prophet, Joseph Smith, as prophet, seer, revelator? Until this point the LDS Church had no other manuscript evidence to validate their scriptures. The LDS Church claimed that the golden plates, the ones supposedly used by Joseph Smith to translate the Book of Mormon, had been taken back by the angel Moroni. Mormons now had manuscript evidence for their scriptures with The Book of Abraham. Surely now it would be possible to validate Joseph Smith as divinely appointed by God.

The experts in Egyptology were called in to examine the papyri and the news wasn’t good. It appeared that these papyri showed no relationship to Abraham. The name of Abraham wasn’t even mentioned in the parchments. Instead, the papyri were from the Book of the Dead which was a common Egyptian funerary text. The papyrus was written for a man named Hor. He was a priest of Amon-Ra. Hor died around A.D. 60 – long after the time of Abraham!

“It has been proven that the Book of Abraham collection is nothing more than a common collection of Egyptian funeral documents that are based on pagan myths related to Egyptian idolatry.” (Dialogue: A Journal of Mormon Thought, Autumn 1968, pp. 109-34)

What particularly fascinated me were the facsimiles that are presented throughout The Book of Abraham. There are three facsimiles. Pictured below is the first one: 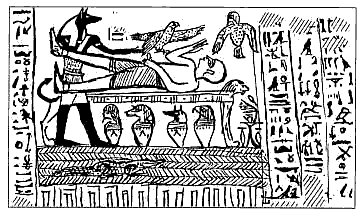 It’s very clear that Joseph Smith was way off on his “divine” drawings. A complete analysis of this picture above is given by Bill McKeever and you can see the presentation here:

Notice some of the characters seen in the picture above. Several of them will be mentioned again in the series of blog posts. Egyptologists state that the figure on the far left is the jackal-headed god Anubis. He is embalming Osiris who is lying on the lion-headed embalming couch. (This isn’t Abraham!). The bird with the human head to the far right is the soul of Osiris about to enter his body. Isis, wife of Osiris, has taken the form of a falcon and is on top of Osiris’ phallus (male organ) which he is holding to impregnate her with his future son Horus. The four sons of Horus are shown as the heads of the canopic jars below the couch. Their names are Amset, Hapi, Duamutef, and Qebehsenuef. In the water below is the crocodile god Sobek.

It is amazing to see the difference between Joseph Smith’s creation and the actual portrayal from the Book of the Dead side by side. How can any person honestly and sincerely not admit that there is a credibility problem with Joseph Smith? In the next segment of this series we will look at Facsimile No.2 to see what other messages Joseph Smith supposedly received for us from his god.