For mature audiences only 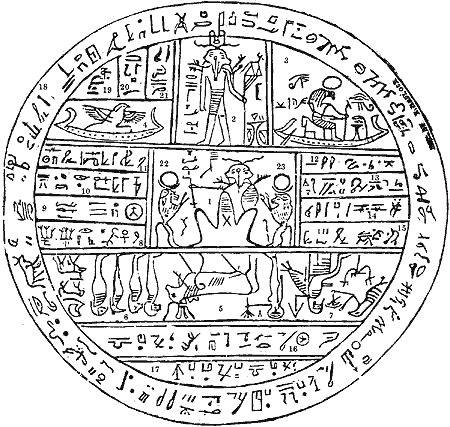 Just like Facsimile No.1, this has been proven by Egyptologists to be a common funerary amulet called a hypocephalus. It was placed under a mummy’s head to supposedly keep the dead person warm and for protection against grave robbers who might want to desecrate the body. There is no known photograph of the original papyrus of Facsimile No.2. What Joseph Smith had purchased from Michael Chandler had been damaged and contained missing pieces just like Facsimile No.1. In the Egyptian Alphabet and Grammar papers, published in 1966, there was a remarkably good drawing of Facsimile No.2 completed in pen and ink. This drawing showed that much of the right side on the top and bottom were blank due to being missing. Just like Facsimile No.1, this meant that Joseph Smith would have to fill in the missing parts. When Joseph Smith completed his drawings were they close to what actual copies of this common funerary amulet look like? No, they weren’t. For followers of Joseph Smith who didn’t know anything about these amulets they looked genuine. For Egyptologists they aren’t.

Here is a picture of the kind of hypocephalus that is seen in museums around the world: 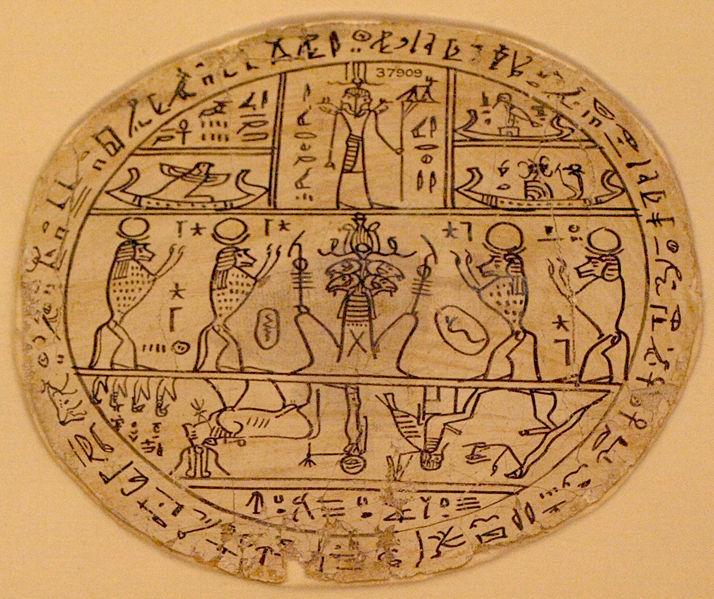 I would now like to draw your attention to a certain part of this facsimile. Here we have a picture of a man/bird sitting in a chair with an erect penis. The explanation of Figure 7 is listed in the Book of Abraham. 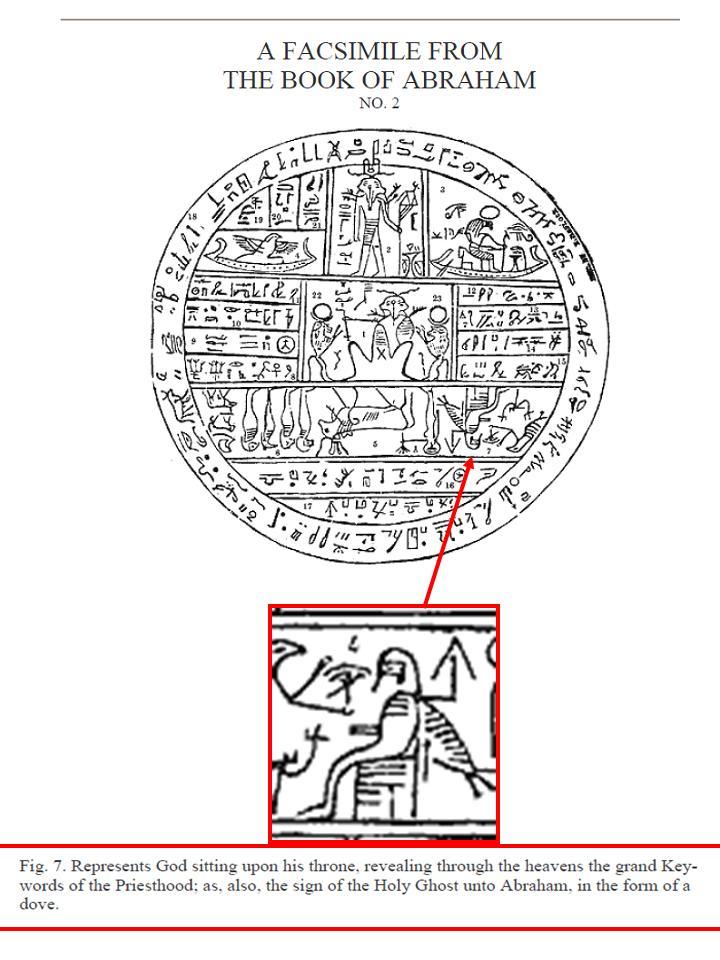 (In at least the 1973 edition of the Church-published Pearl of Great Price, the erection was removed from Facsimile 2.)

When I first saw this character I thought it might have been Horus. In Facsimile No.1 Osiris and Isis procreate and Isis has a son called “Horus” according to Egyptian legend. Their son, Horus, is portrayed as a man with the head of a falcon. Horus is half-man and half-falcon because of his mother, Isis, had taken the form of a falcon and his father, Osiris, who was in the form of a man. However, it’s clear in the picture in Facsimile No.2, Figure 7, that this is not the head of a falcon. However, the character does have the tail of a hawk so it’s similar to Horus in that respect. (Personally, it looks like the head of a penguin, but I doubt that would be in any Egyptian pictures since no Egyptian would have ever seen a penguin anywhere near Egypt!) The bird/man in Figure 7 has the head of a dove. Here is what Horus looks like according to Egyptologists:

Egyptologists confidently state this character in Facsimile No.2, Figure 7 is the Egyptian god named “Min”. He is the god of fertility and sexuality. He is mostly portrayed as a male with an erect penis as can be seen in the picture above from Facsimile No.2. However, what is different about this picture in Facsimile No.2, Figure 7, is that the only thing visible that Joseph Smith saw with this character was the head of the dove. Joseph Smith had to fill in the rest and he did not do it correctly. The classic and well known rendition of this common scene in the funerary amulet is pictured below and is known as Leyden AMS 62. Compare this photo with the actual amulet of the hypocephalus pictured above in the color photo from a museum. Which does Leyden AMS 62 resemble most?

“In Egyptian times, he was usually an ithyphallic bearded mummified man, standing with both legs together, an arm raised holding his symbol or a flail and wearing the same low crown with twin plumes as Amen. (The way he holds the flail forms the V while his upraised forearm seems to thrust inside the V.) The Egyptian paintings and reliefs on tomb walls and temples didn’t show Min’s other arm, but the statues of the god show him with his hand encircling the base of his penis.” (Min, God of Fertility, Power and the Eastern Desert).

Joseph Smith also got the character standing in front of Min wrong. Joseph Smith has a bird being representative of the Holy Ghost while in fact in Leyden AMS 62 it is supposed to be a serpent with legs with an erect penis as well, the Egyptian god Nehebka, presenting to Min the wedjat-eye which is the symbol of good gifts. In addition to being a fertility god, Min was also the god of male fertility giving mankind the ability to procreate. He was also an agricultural god. He was the god of the Eastern Desert. He was a god who would protect those who were traveling including merchants who were involved in trading. He was worshipped by miners and men who worked the stone quarries. Min was also a moon god, but he is mainly known at the fertility god. He was also known for being very destructive despite his creative abilities in the area of fertility. LDS Scholar Dr. Hugh Nibley says this about Min:

“As the supreme sex symbol of gods and men, Min behaves with shocking promiscuity, which is hardly relieved by its ritual nature…His sacred plants were aphrodisiacal [lettuce]…and he is everywhere represented as indulging in incestuous relationships with those of his immediate family; he had the most numerous and varied religious entourage of all the gods, consisting mostly of his huge harem…The hymns, or rather chanting of his worshippers were accompanied with lewd dancing and carousing…to the exciting stimulus of a band of sistrum-shaking damsels” (Abraham in Egypt, p. 210)

After reading all of the above I was curious as to what the LDS Church had to say about figure 7 from Facsimile No.2 in their Church manual called, The Pearl of Great Price Student Manual – Religion 327:

“…the explanations for figures 3, 7 and 8 establish a clear relationship between the contents of facsimile 2 and the ordinances of the temple.” (p. 39)

“Facsimile 2, figures 7-8. Returning to God’s Presence: Egyptologists suggest that the hypocephali contain information to help deceased persons return to the presence of God. Similarly, the Lord has given Latter-day Saints divine help to return to His presence. President Brigham Young taught: ‘Your [temple] endowment is, to receive all those ordinances in the house of the Lord, which are necessary for you, after you have departed this life, to enable you to walk back to the presence of the Father, passing the angles who stand as sentinels’ (Discourses of Brigham Young, 416)”. (p. 40)

That’s it? Where’s the rest of it? Surprisingly enough, that was all this LDS Church manual had to say about figure 7 despite all the other information from knowledgeable Egyptologists on what this figure is all about. Here is what the good professors over at BYU had to say about Joseph Smith’s drawing and explanation of what is taking place in figure 7:

“Joseph Smith mentions here the Holy Ghost in the form of a dove and God ‘revealing through the heavens the grand key-words of the priesthood.’ The procreative forces, receiving unusual accentuation throughout the representation, may stand for many divine generative powers, not least of which might be conjoined with blessing of the Priesthood in one’s posterity eternally” (BYU Studies, Spring 1977, p. 273)

What does all of this talk about Min have to do with the Mormon god? Is there any similarity? Why is the correlation made with the sexually active Min? Mormonism does teach that their god is united in celestial marriage to (at least one) “mother in heaven”: