Posted on April 1, 2010 by Aaron Shafovaloff 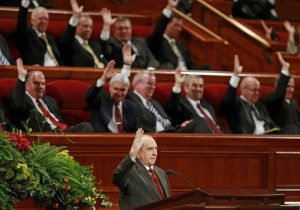 In what comes as a surprise to many of us, the Salt Lake Tribune is running an article on a new Church leadership project geared at openly engaging theological issues. Starting this General Conference, many of the apostles will engage long-standing theological questions that have bothered both insiders and outsiders. Talks are scheduled on the nature of repentance, the past of God, and exaltation.

Throughout the year, the apostles will also be holding open forums for discussing Mormon theology. The public will have the opportunity to directly ask the prophet and apostles theological questions. CES teachers, BYU professors, and laymen will all have equal opportunity to present questions. Answers will be given from an apostolic panel, and the leadership has committed to being open about important internal disagreements.

Some of the condescending excuses Mormon apologists and BYU professors have given for Mormon leadership not being more direct and active in engaging outstanding theological issues is that they are too busy doing administrative work and not thoughtful enough to navigate the terrain of scripture and historical Mormon theology. The Church apparently aims to reverse this patronizing attitude. Part of the impetus for the project was a desire on the part of Church leadership to not let non-official groups do important theological work for them. In the press conference Boyd K. Packer said, “We simply have no good excuse to let other groups do our theology for us. The Brethren are led by the Spirit of the Lord and with His help are fully capable. The time is now to stop depending on groups with which we enjoy plausible deniability. Before the Lord, we need to own our theology.”

President Monson also made it clear that First Presidency statements will be soon forthcoming, and that they will be specifically focused on clarifying Mormon doctrine. Monson explained, “If we can spend the time to specify that ‘one-tenth of all their interest annually’ in D&C 119 refers to income [First Presidency letter, Mar. 19, 1970], then surely we can take the time to issue statements on far more important issues.”

I asked some of my committed Mormon friends what they thought of the new project, and they were excited. Mormon author Peter Presthud (for various Cedar Fort publications) beamed, “Thank the Lord for continuing revelation!”

“Theology matters. But ever since I learned what kind of mess the Church has created, I’ve had to focus on the idea that theology doesn’t matter much at all. I’ve also had to work hard at helping people take Mormon scholars more seriously than the poor old prophets and apostles. From time to time when a speaker at one of our conferences quotes our leaders as though anything they say is authoritative, we wince and and feel sorry for him. One of the ways one can most discredit themselves in our line of Mormon intellectual work is to assume anything the LDS Church or its leaders say is definitive. Hopefully this new initiative will change the entire mindset of our field.”

Mormon apologist Bruce Gordon Peterson expressed pessimism, explaining that whenever Mormon prophets have tried to speak authoritatively and definitively on controversial matters of theology, the results have been embarrassing. He pointed me to a 2006 statement by Blake Ostler, who said,

“I personally believe that [Brigham Young’s] theology was a disaster for the most part — tho I like his emphasis on God as a person and not merely a title or essence as the basis of our worship.” (>>)

We’ll keep you posted on any developments. April 1, 2010 will go down in the books as an important milestone in Mormon history.

This entry was posted in Uncategorized and tagged April Fools. Bookmark the permalink.