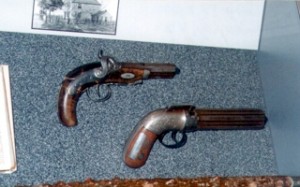 At the October 2009 General Conference LDS Apostle Jeffrey Holland gave a talk titled, “Safety for the Soul.” This talk has been closely examined and critiqued in a series of videos posted by FlackerMan on You Tube. In video #2 (of 5) FlackerMan examines Mr. Holland’s claim of Joseph Smith’s dying testimony of the Book of Mormon. In October 2009 Mr. Holland said,

“May I refer to a modern last-days testimony. When Joseph Smith and his brother, Hyrum, started for Carthage, to face what they knew would be an imminent martyrdom…”

In his critique, FlackerMan disputes the frequently asserted LDS claim that Joseph Smith knew he was going to die at Carthage. FlackerMan asks some pretty interesting questions related to Joseph’s behavior in relation to his death; they, in turn, call into question the notion that Joseph was willingly going like a lamb to the slaughter as he travelled from Nauvoo to Carthage (see D&C 135:4). I have edited and listed many of FlackerMan’s questions here for your consideration.

Did Joseph Smith know he was going to Carthage to die? The circumstances and Joseph’s behavior surrounding his death make that seem highly unlikely. This is yet another faith-promoting Mormon myth employed to persuade people to pin their eternal hopes to what is ultimately a lie.

Sharon surrendered her life to the Lord Jesus Christ in 1979. Deeply passionate about Truth, Sharon loves serving as a full-time volunteer research associate with Mormonism Research Ministry. Sharon and her husband live in Minnesota.
View all posts by Sharon Lindbloom →
This entry was posted in Joseph Smith, Mormon History and tagged Carthage Jail, Joseph Smith. Bookmark the permalink.