Mormonism’s President and the Role of the Angry Mob

Posted on December 8, 2014 by Sharon Lindbloom 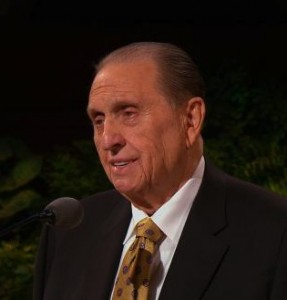 In April 2014, at the Mormon Church’s General Conference, President Thomas S. Monson spoke of love being the essence of the gospel. Explaining that Jesus Christ is our great example of love, President Monson said,

“The angry mob took His life.”

Jesus was executed by the Roman government, at the request of the Sanhedrin (i.e., the Jewish judicial council). While the Bible records that some people were pretty riled up over Jesus and His teachings, it is quite unusual to hear His trial and crucifixion referred to as having been perpetrated by an “angry mob.” In fact, that particular phrase is the one most often used by Mormons in relating the death of Joseph Smith, not Jesus:

“In 1844 [John Taylor] narrowly escaped death when Joseph and Hyrum Smith were murdered at Carthage Jail. Unable to defend himself against the angry mob, Brother Taylor ran to the window to leap out but was stopped as a shot struck him in the thigh.”

“Just after five o’clock, the angry mob that had gathered outside attacked.”

“The angry mob stormed the jail; they came up the stairway, blasphemous in their cursing, heavily armed, and began to fire at will.”

“Looking from the windows and imagining the crush of an angry mob on the narrow stairs, visiting teens become lost in thought as they sit for a moment in the room where the beloved Prophet of the Restoration became a martyr.”

“We felt that same witness as we exited this room in Carthage, Illinois, where Joseph Smith and his brother Hyrum, “the best blood of the nineteenth century” (D&C 135:6), were martyred by an angry mob.”

Upon reading President Monson’s narrative about Jesus where he stated that “the angry mob took His life,” someone well-acquainted with the story of Joseph Smith’s death remarked, “It sounds like Monson is confusing his saviors.” Interesting thought.