Posted on September 23, 2010 by Sharon Lindbloom 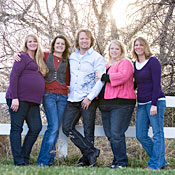 I know it sounds like a spoof, but it’s not. On September 26th (2010) TLC will premiere a new reality show: Sister Wives. According to ABC News,

“The series will follow the fundamentalist Mormon family of Kody Brown and his four ‘sister wives’—Meri, Janelle, Christine, and their new wife, Robyn. Together, they have 13 children [16 including Robyn’s children by a previous marriage] living in a Utah apartment building.”

The Browns are political activists going public with their lifestyle in an effort to legalize polygamy in Utah. They believe the felony-status of polygamy results in discrimination toward the 40,000 Utahans currently living as polygamists.

Choosing plural marriage due to religious convictions, the Browns have joined a campaign for legalization called Principle Voices. According to an interview video at BBC News, one of the organizers, Anne Wilde, sells a popular book titled, Jesus Was Married. Anne’s late husband authored this book after extensive research into ancient documents as well as LDS Church history and doctrine. Explaining the painting on the cover of the book Anne said,

“This is Martha and Mary. And those, we believe, were two of [Christ’s] wives, along with Mary Magdalene. So, if Christ says ‘Come follow me,’ He didn’t say come follow me in every way but marriage, and so He meant in all ways. And we believe He set the example for plural marriage.”

Anne Wilde and her group agree with at least two early LDS apostles:

“Now there was actually a marriage [at Cana]; and if Jesus was not the bridegroom on that occasion, please tell who was. If any man can show this, and prove that it was not the Savior of the world, then I will acknowledge I am in error. We say it was Jesus Christ who was married, to be brought into the relation whereby he could see his seed, before he was crucified.” (Orson Hyde, Conference message, October 6, 1854, Journal of Discourses 2:82)

“One thing is certain, that there were several holy women that greatly loved Jesus — such as Mary, and Martha her sister, and Mary Magdalene; and Jesus greatly loved them, and associated with them much; and when He arose from the dead, instead of showing Himself to His chosen witnesses, the Apostles, He appeared first to these women, or at least to one of them — namely, Mary Magdalene. Now it would be natural for a husband in the resurrection to appear first to his own dear wives, and afterwards show himself to his other friends. If all the acts of Jesus were written, we no doubt should learn that these beloved women were His wives.” (Orson Pratt, The Seer, p. 159)

Fundamentalist Mormons also embrace the declaration of another early LDS Apostle who said,

“You might as well deny ‘Mormonism,’ and turn away from it, as to oppose the plurality of wives. Let the Presidency of this Church, and the Twelve Apostles, and all the authorities unite and say with one voice that they will oppose that doctrine, and the whole of them would be damned.” (Heber C. Kimball, October 12, 1856, Journal of Discourses 5:203)

Though the LDS Church continues to try to distance itself from polygamy, plural marriage is a fruit growing directly from the root of Mormon founder and Prophet Joseph Smith. Smith started it, his followers embraced it, and subsequent LDS leaders insisted that God required it.

In 2006 fifteenth LDS Prophet Gordon B. Hinckley said, “I wish to state categorically that this church has nothing whatsoever to do with those practicing polygamy.” It was a hard sell then, and remains a hard sell now. Official members in good standing of The Church of Jesus Christ of Latter-day Saints are not currently allowed to engage in mortal polygamy. But those fundamentalist Mormons who do practice polygamy do so because they cling to the very foundation of Mormonism, and live by the teachings of those early Mormon prophets, seers and revelators.

Sister Wives is scheduled to air on TLC for 7 weeks. That may not be enough to really change people’s perceptions of polygamy as the Browns hope. But it will surely cause more problems for the LDS Church as viewers once again connect polygamy with Mormonism.
—–
Information and help for polygamists: A Shield and Refuge Ministry–a loving, Christ-centered outreach to those seeking freedom from Mormon Fundamentalism and Polygamy.

Sharon surrendered her life to the Lord Jesus Christ in 1979. Deeply passionate about Truth, Sharon loves serving as a full-time volunteer research associate with Mormonism Research Ministry. Sharon and her husband live in Minnesota.
View all posts by Sharon Lindbloom →
This entry was posted in Early Mormonism, Fundamentalist Mormonism, Polygamy and tagged Fundamentalists, Plural Marriage, Polygamy. Bookmark the permalink.