The Dysfunctional Doctrine of Mormon Polygamy

Continuing our discussion about Mormon polygamy, on June 29 (2011) Doug Gibson, from Ogden’s Standard-Examiner, recounted the toll the 19th century practice of polygamy took on LDS “marriages and hearts.” He wrote,

“Polygamy was a contradictory doctrine, and extremely dysfunctional. Brigham Young once said that he wished it wasn’t a doctrine, but later also raged that those who disbelieved in polygamy — and even monogamous [sic] LDS men — were in danger of damnation. And polygamy led to divorce among LDS elite leaders in numbers that would shock today.” 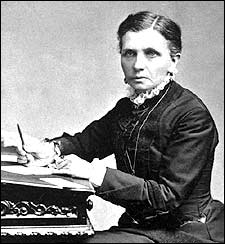 Citing Richard Van Wagoner’s book, Mormon Polygamy: A History, Mr. Gibson illustrated the paradox “for faithful LDS women who reluctantly embraced the doctrine as a commandment of God yet suffered personal heartache and financial pain due to their husband’s extracurricular wives” in the story of Emmeline B. Wells. Emmeline was the seventh of fifteen plural wives of Daniel H. Wells, a member of the LDS First Presidency.

Publicly, Emmeline was an advocate for polygamy, writing that it

“gives women the highest opportunities for self-development, exercise of judgment, and arouses latent faculties, making them truly cultivated in the actual realities of life, more independent in thought and mind, noble and unselfish.”

But privately, in her journal, Emmeline shared her heart:

“O, if my husband could only love me even a little and not seem to be perfectly indifferent to any sensation of that kind. He cannot know the cravings of my nature; he is surrounded with love on every side, and I am cast out.”

Mr. Gibson did not include further heart wrenching words from Emmeline, but Richard Van Wagoner did. Emmeline’s journal continued,

“O my poor aching heart when shall it rest its burden only on the Lord…Every other avenue seems closed against me.” (p. 94)

“Anniversary of my marriage with Pres. Wells. O how happy I was then how much pleasure I anticipated and how changed alas are things since that time, how few thoughts I had then have ever been realized, and how much sorrow I have known in place of the joy I looked forward to.” (Mormon Polygamy, 94)

Emmeline was married and devoted to Daniel for nearly 40 years, four decades during which he had “essentially ignored” her. But within a year of his death, an aging Daniel Wells renewed companionship with his wife Emmeline — and died too soon of pneumonia. Emmeline lamented,

“Only memories, only the coming and going and parting at the door. The joy when he came the sorrow when he went as though all the light died out of my life. Such intense love he has manifested towards me of late years. Such a remarkable change from the long ago – when I needed him so much more.” (Mormon Polygamy, 95)

Biblically speaking, in marriage a man and a woman complete each other – the two become one flesh (Genesis 2:22-24). The husband is to love his wife “as Christ loved the church and gave himself up for her,” cherish her, and hold fast to her  (Ephesians 5:25-31). Mormon polygamy made this virtually impossible. Many women of early Mormonism lived their lives in profound sorrow because God’s pattern for marriage was ignored as Mormon leaders “[taught] for doctrines the commandments of men.”

Sharon surrendered her life to the Lord Jesus Christ in 1979. Deeply passionate about Truth, Sharon loves serving as a full-time volunteer research associate with Mormonism Research Ministry. Sharon and her husband live in Minnesota.
View all posts by Sharon Lindbloom →
This entry was posted in Early Mormonism, Polygamy and tagged Daniel Wells, Emmeline B. Wells, Polygamy. Bookmark the permalink.

18 Responses to The Dysfunctional Doctrine of Mormon Polygamy