Posted on September 20, 2010 by Sharon Lindbloom

Over at the Mormon Chapbook blog, Mike Tea takes a look at the demographics of Mormonism. Employing a helpful map (below) provided by the Pew Forum on Religion and Public Life, Mike argues that the grandiose LDS claims of worldwide Mormon growth and influence are greatly overstated. He writes,

…into modern times Mormons have entertained the idea that one day “men’s hearts will fail them”, governments will tumble and the Mormon Church with its priesthood organisation and reputation for strong self-government will be called upon to save America and the world, bringing order out of chaos. When we look at the Mormon organisation today it is well to remember that this is how Mormons see themselves. They have a self-image that reflects those early vainglorious ambitions and that belies the real state and strength of the Mormon Church today.

It is this that allows successive Mormon presidents to stand in the two general conferences every year and declare, “The Church has grown steadily since that day in 1830. It continues to change the lives of more and more people every year and to spread across the earth as our missionary force seeks out those who are searching for the truth”* while the fact is the Mormon Church has struggled to grow for some years and is described by some as “flat lining”. (*Thomas S Monson, April 2010 General Conference)

We have looked at Mormon demographics before. Here I want to look at the true geographical extent of the Mormon kingdom…Mormonism is very much an American religion in that the great majority of Mormons today live in the Americas and the most significant concentration of Mormons is in the North-West United States… 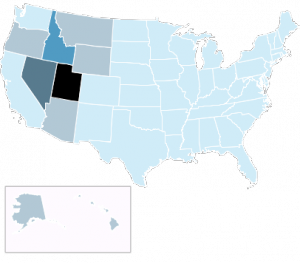 Outside these parameters Mormonism is all but invisible in terms of significant and established communities around the world. At 180,000 for instance the Mormon population of the UK is just 0.24% of the general population. In the rest of the world Mormonism doesn’t even fair as well as this. The Mormon Church outside the Mormon kingdom is truly an outpost of empire. While other churches and denominations can boast strong cultural relevance and identity across borders and traditions Mormonism is American to the core and is a stranger wherever else it goes in the world.

Even adding into consideration the relatively high concentration of Mormons in some islands of the South Pacific, Mike makes a very good point. Putting real numbers into the context of the real world, Mormonism is not on the verge of fulfilling Heber C. Kimball’s bold words:

“And so the nations will bow to this kingdom, sooner or later, and all hell cannot help it.” (Journal of Discourses, 7:170)

I was talking with a young Mormon friend the other day. Though active in his church and committed to his faith, he was explaining the odd phenomenon of Utah Mormonism being “Sunday’s only.” He told me that in places where Mormonism is a minority, members are better people and better Mormons. I asked, “What if the words in D&C [65:2] about Mormonism filling the whole earth came true? What then?” He answered, “That would suck.”

While I don’t share my friend’s aversion to majority-Mormon behavior, I share his sentiment that Mormonism filling the whole earth would be a very unhappy circumstance–because it is my firm conviction that Mormonism stands in the way of people knowing Christ and being reconciled to God through Him. Mormonism is a religion that leads people to trust in a false god while making grand eternal promises it cannot keep.

I long to see a love and devotion for the one true God fill this earth. I long for the fulfillment of Philippians 2:10-11, that “at the name of Jesus every knee should bow, in heaven and on earth and under the earth, and every tongue confess that Jesus Christ is Lord, to the glory of God the Father.”

“He who testifies to these things says, ‘Surely I am coming soon.’
Amen. Come, Lord Jesus!”
(Revelation 20:22)

Sharon surrendered her life to the Lord Jesus Christ in 1979. Deeply passionate about Truth, Sharon loves serving as a full-time volunteer research associate with Mormonism Research Ministry. Sharon and her husband live in Minnesota.
View all posts by Sharon Lindbloom →
This entry was posted in LDS Church and tagged Church growth, Church membership. Bookmark the permalink.

16 Responses to The Mormon Kingdom Today