To Baptize for the Dead…or not?

It’s a saga that’s 16 years in the making, with the story line that goes something like this: The Jewish community is up in arms because they find out the Mormons are being baptized in proxy for deceased Holocaust victims, then the Mormons apologize before eating crow later once it’s discovered they’re still baptizing these folks. So, so they apologize and say it will never happen again. Phew. 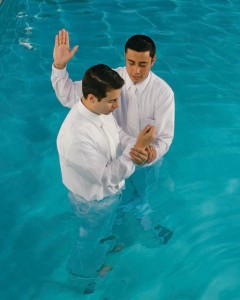 It all began in 1994. The Mormon leaders promised to stop having their people do work for these Holocaust victims, but, somehow, the Jewish names kept getting into the main database. The last time the Jewish and LDS representatives met was in 2008. One disappointed Jewish leader, Ernie Michel, refused to participate any longer. Despite losing Michel, the leaders kept meeting and struck a deal in early September that is totally based on a new computer system, which will apparently no longer allow participants to submit names of Holocaust victims or even celebrities. (Even Adolph Hitler has had his work done in a Mormon temple!). We can only keep our fingers crossed because they’ve promised this before.

Michel, who appeared relieved that an agreement was made, said, “We are hopeful now that [Mormons] will keep their word,” he told a Jewish Week journalist, “and that this will lead to a much better relationship.” (The Salt Lake Tribune, September 2, 2010). “Keep their word”? Ouch, it sounds like Mr. Michel has some issues with Salt Lake City.

OK, so now I have some questions for the Mormon leadership. First of all, does this mean that, through no fault of their own, these six million Jewish folks who never heard the Mormon gospel will never, ever get to hear it in the next life either because of the complaints of a few who were living? Death in a concentration camp and no hope for any level of heaven…does this seem fair?

Let’s be honest. If Mormons really do believe that there is another possibility after death to accept the LDS gospel, it seems like the LDS leadership should have just told the Jewish leadership, “Too bad. If these dead spirits don’t want to allow the missionaries from Paradise through their doors, then they can hide behind the couch like every other nonMormon who happens to be living.”  Oh, and what about the celebrities whose work hasn’t been done yet? Apparently, they’re doomed as well. Sorry David Letterman and Jose Canseco.

Another question: If a Holocaust victim already had work done for him/her before 2010, does he/she get to still have the missionaries visit him/her in Spirit Prison? Or do those spirit missionaries have to return to Paradise? What a conundrum!

Still more questions: Could this rule be expunged once the millennium starts? After all, the millennium is when the temple work is supposed to be completed. Will the Mormon leaders not care about hurt feelings during this 1,000-year period of time and just do the work anyway, darn anyone who gets in the way?

Finally, is it possible for me to petition and have my name removed from the genealogical rolls? I want to get in on this deal. After all, what if I never wanted this work done in the first place? Could we expand the sign-in sheet to include those of us who want to be exempt?

I think I wouldn’t make a good God anyway, so I’m probably best left to Outer Darkness. Just ask my wife and kids.

22 Responses to To Baptize for the Dead…or not?