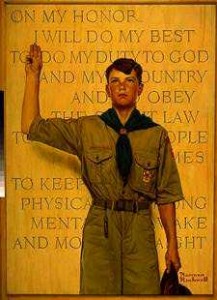 Earlier this week the Charlotte Observer reported on a controversial decision made by a local Christian church: Christ Covenant Church declined an offer from a Mormon couple who wanted to volunteer as Scout leaders. They were refused because their Mormon faith is “not consistent with historical Christianity.” The pastor of Christian Education and Young Families at Christ Covenant explained,

“Boy Scouts is a ministry of our church. We want to insure that what (Scout leaders) believe is consistent with our denominational viewpoint.”

According to the Charlotte Observer,

“What upset the Stokes family most was the church questioning their Christianity.

“And, she added, look at the formal name of their church: The Church of Jesus Christ of Latter-day Saints.”

“‘It was so offensive,'” said Jodi Stokes, who was raised Catholic, then became a Mormon. ‘I have a picture of Jesus in my living room.’

A look at Christ Covenant’s online Statement of Faith reveals that the pictures one hangs in one’s living room, and the name of the church to which one belongs, do not even merit honorable mention in its summary of “What We Believe.” In fact, of the nine doctrines listed in that Statement of Faith (addressing Scripture, the nature of God, the nature of man, the Being of Christ, the way of salvation, etc.), Mormonism disagrees with six (or perhaps even seven) of them. Even so, the Charlotte Observer reported,

“Bishop Steven Rowlan of the LDS ward, or parish, which the Stokes attend in Weddington, acknowledged that Mormon theology diverges from some beliefs shared by most Protestants, Catholics and Orthodox Christians. But he insisted members of the LDS church are as Christian as the members of Christ Covenant.

“‘Yes, there are distinct differences,’ he said. ‘But not with respect to being a Christian. We definitely and truly are Christians in every sense of the word.'”

Well, not in the senses of the word as understood by Christ Covenant Church. Nor, as the newspaper points out, as understood by “Catholic, Protestant, and Orthodox churches” in general. Mr. Rowlan is surely mistaken when he says Mormons are Christians “in every sense of the word.” Perhaps in every sense of the word as he defines it, or as the LDS Church defines it, but not necessarily as others may understand and define Christianity. Even so, this argument in this context is a moot point. Christ Covenant Church clearly explained that those who are in positions of leadership in that church must be “on the same [doctrinal] page” as it is defined in the church’s Statement of Faith. Whatever label is attached (Christian, non-Christian, Mormon, etc.), whatever pictures may be prominently displayed in one’s home, are not the point; what one believes is what’s important.

According to the Charlotte Observer, Christ Covenant Church assured Mr. and Mrs. Stokes that their boys were welcome to join the church’s Scouting program, and Mr. and Mrs. Stokes were invited to volunteer as helpers in the program if they’d like, but “as practicing Mormons, they couldn’t be leaders.”

The Bible has plenty to say about the purity of faith and leadership within Christ’s church. For example, the Apostle Paul called for those of the church to be “of the same mind, having the same love, being in full accord and of one mind” (Philippians 2:2). He admonished, “Do not be unequally yoked with unbelievers” (2 Corinthians 6:14). “What fellowship has light with darkness?” he asked. “What agreement has the temple of God with idols?” Regarding the qualifications for Elders in the church, Paul said they “must hold firm to the trustworthy word as taught, so that [they] may be able to give instruction in sound doctrine and also to rebuke those who contradict it” (Titus 1:9). Certainly any leader in the church should aspire to “rightly handling the word of truth” (2 Timothy 2:15).

Because Mormonism does not rightly handle the word of truth, because it promotes the worship of an unbiblical god, because the doctrine it espouses does not conform to biblical teaching (as understood by “most Protestants, Catholics and Orthodox Christians”), a “practicing Mormon” (i.e., one who embraces the teachings and god of Mormonism), cannot be allowed to hold a position of leadership within Christ’s church. The members of Christ Covenant Church, in standing firm on this issue, demonstrate their commitment to obey and honor the one true God, the God they love. Would that all Christian churches would stand firm for God’s Truth.

Sharon surrendered her life to the Lord Jesus Christ in 1979. Deeply passionate about Truth, Sharon loves serving as a full-time volunteer research associate with Mormonism Research Ministry. Sharon and her husband live in Minnesota.
View all posts by Sharon Lindbloom →
This entry was posted in Christianity and tagged Boy Scouts, Christian, Church leadership, Faith. Bookmark the permalink.