Posted on November 8, 2010 by Sharon Lindbloom

JT Hillman wrote a letter to the editor of Louisiana’s towntalk.com. In an effort to point people to Christ, JT wrote (in part),

“I read in The Town Talk, some dear person was thanking St. Jude. St. Jude cannot help you. Mary, St. Paul, St. Peter, my deceased mother, they are dead. Only Jesus can help you.

“All these well-known people lived and died never to be seen from or heard from again.”

It may be because few people have left comments responding to JT’s letter, or it may be that people are unaware, but I was a bit surprised that no Mormons have challenged JTs assertions. 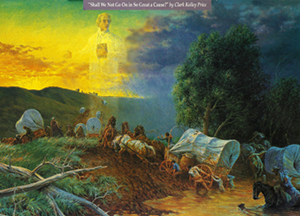 It is a fact that Joseph Smith, the founding Prophet of Mormonism, died in 1844, and his bones remain in the grave. But some Latter-day Saints have claimed that they have seen and heard from the Prophet again.

The February 1998 issue of Ensign magazine included a lengthy article about Brigham Young and how he lived his life as a “Student of the Prophet.” In this article several post-mortal “appearances” of Joseph Smith are related. For example, a report of a vision of the Prophet received by Brigham Young:

“In an 1869 sermon, President George A. Smith, First Counselor in the First Presidency, recalled that when ‘every trouble and calamity’ seemed to beset the Saints in Nauvoo, President Young fasted and prayed frequently for guidance. Thereafter he experienced ‘a vision of Joseph Smith, who showed him the mountain that we now call Ensign Peak, immediately north of Salt Lake City, and there was an ensign fell upon that peak, and Joseph said “Build under the point where the colors fall and you will prosper and have peace.”‘ President Young knew he was to settle in the Salt Lake Valley.” (Ronald W. Walker, “Brigham Young: Student of the Prophet,” Ensign, 2/98, pp. 55-57)

The Ensign article continued on to tell of a “vivid dream” in which the Prophet Joseph taught Brigham Young about the “organization of God’s family under the priesthood’s sealing ordinances.”

Another time, “after a good deal of praying,” Brigham Young experienced a “significant dream” in which Joseph delivered a “message” that “became an important guide in [Young’s] conduct of Church affairs.”

At General Conference in November 1998 an LDS apostle told of “an experience of President Wilford Woodruff when he told of a visitation he received from the Prophet Joseph Smith some time after the Prophet was martyred. According to President Woodruff’s own account: ‘[Joseph Smith] came to me and spoke to me.'” During this “visitation,” Joseph reportedly delivered “new doctrine” to President Woodruff (M. Russell Ballard, “Are We Keeping Pace?” Ensign, 11/98, p. 6).

All of these alleged post-mortal appearances of Joseph Smith took place over 100 years ago but, according to Mormonism, that should not make us think we’ve seen the last of the Prophet. During the commemoration of the 150th anniversary of the death of Joseph Smith, by way of consolation, LDS Church News said, “Lift up your heads and rejoice; for behold! it is well with my servants Joseph and Hyrum. My servant Joseph still holds the keys of my kingdom in this dispensation, and he shall stand in due time on the earth, in the flesh, and fulfill that to which he is appointed” (Church News, week ending July 9, 1994, p. 5; quoting early LDS apostle Parley P. Pratt).

So, according to the LDS Church, Joseph Smith has given direction to subsequent leaders of the Mormon Church from beyond the grave, and he is coming again to “preside over Zion” (D&C 93:32 as interpreted by Rodney Turner, emeritus Professor of Ancient Scripture (BYU), Jesus & Joseph: Parallel Lives, p. 194).

And Mormons wonder why Christians are concerned about LDS teachings.

(For a Biblical perspective on the living communing with the dead see Deuteronomy 18:10-12)

Sharon surrendered her life to the Lord Jesus Christ in 1979. Deeply passionate about Truth, Sharon loves serving as a full-time volunteer research associate with Mormonism Research Ministry. Sharon and her husband live in Minnesota.
View all posts by Sharon Lindbloom →
This entry was posted in Afterlife, Joseph Smith and tagged Brigham Young, Joseph Smith, Parley P. Pratt. Bookmark the permalink.