“I was answered that I must join none of them, for they were all substantially correct.”

Posted on February 7, 2011 by Sharon Lindbloom

LDS scholar Daniel Peterson wrote an article for Mormon Times, published in its Defending the Faith section, titled, “God’s sheep recognize his voice.” The main point Dr. Peterson seems to be making in this article is that Mormons (Mormonism) do not really reject non-Mormon religious experiences and doctrines. 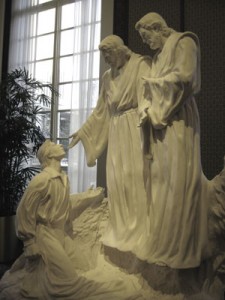 A natural question to put on the table, then, is: What about Joseph Smith’s alleged First Vision, in which he claims he was told, “I must join none of [the existing churches], for they were all wrong; and the Personage who addressed me said that all their creeds were an abomination in his sight; that those professors were all corrupt; that: ‘they draw near to me with their lips, but their hearts are far from me, they teach for doctrines the commandments of men…’” (Joseph Smith – History 1:19).

Dr. Peterson tackles this objection stating, “When Joseph Smith learned that the then-existing Christian churches were corrupt, that didn’t mean that they were totally wrong. To say that something is ‘corrupt’ means that it has been damaged. We speak of ‘corrupted texts’ or ‘corrupted files,’ intending to say that they have been infected or tainted — not that their original content has been replaced by something completely different.”

I wouldn’t think Dr. Peterson needs to be reminded that what Joseph Smith actually “learned” was that all the churches were wrong; all their creeds (i.e., a summary of what they believed) were an abomination to God (i.e., detested by Him), and the professors (i.e., those who publicly unite themselves to the visible church – church members) were all corrupt (i.e., depraved, tainted with wickedness. This definition is supported by the cross reference of Jude 1:4 as provided by the LDS Church).  Furthermore, the doctrines taught in these wrong churches were not God’s truth; rather, they were “the commandments of men.” (Definitions offered here are from Webster’s 1828 American Dictionary).

Such a forceful denunciation from Joseph Smith does not seem to square with Dr. Peterson’s next assertion: “In fact, many mainstream Christian doctrines were and are substantially correct.”

That’s an interesting assessment, but I can’t imagine where Dr. Peterson finds it in Mormonism. Though admittedly not scholars, LDS leaders (i.e., prophets, seers and revelators), over a long period of Mormon history, have taught things like:

Does the teaching of past LDS prophets and apostles engender the idea that “many mainstream Christian doctrines were and are substantially correct”?

In the Mormon Times article, Dr. Peterson provides an example of a “substantially correct” mainstream Christian doctrine. I’ll blog about that example here at Mormon Coffee on Thursday.

Sharon surrendered her life to the Lord Jesus Christ in 1979. Deeply passionate about Truth, Sharon loves serving as a full-time volunteer research associate with Mormonism Research Ministry. Sharon and her husband live in Minnesota.
View all posts by Sharon Lindbloom →
This entry was posted in LDS Church and tagged Daniel Peterson, First Vision, True Church. Bookmark the permalink.

66 Responses to “I was answered that I must join none of them, for they were all substantially correct.”