Why Grace Can Be So Hard to Receive 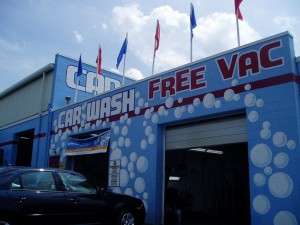 I was driving by a car wash near our Utah home for the fiftieth or sixtieth time and once again saw the sign hanging there. It read, “Free vacuum.” Part of me had been avoiding this for the past three months. “C’mon, Johnson, don’t be a sucker,” my rational side screamed at me. “Nothing is free! There’s always a catch.” Thinking about the many strands of hair in my back seat, compliments of my two Golden Retrievers who often come with me to pick up my youngest daughter at her elementary school, I decided to give it a shot.

As I drove closer, I saw a half dozen vacuums, all turned on and just waiting for someone to come along and put them to use. As I took the nozzle back and forth across the fabric seats—dog hairs flying—I kept thinking that this just didn’t feel right, that somebody was going to come over and ask me what I was doing and if I had paid. Perhaps this is a common feeling is because every other car wash facility has a different sign, warning violators that “Vacuums are for customers only!!!” Nobody ever came to tell me what I was doing was wrong. It was, as advertised, a “free vacuum.”

It reminded me of the story of a young girl who one day decided she wanted to bless others by setting up a table and giving away lemonade. This was unusual, and hence hardly anyone took her up on the offer. Then a wise man walked up to her and suggested she charge 25 cents a cup and give the money away to charity. She acted on that advice, and the customers lined up.  They were thirsty, but they just couldn’t handle this concept of “free.”

I think back to when I was in Manti, Utah last June. A long-time Mormon (whom I had met that day) and I had a very nice conversation in the city park. We must have spent three hours one afternoon talking about our faith. This gentleman, who appeared to be in his mid-40s, held some common misconceptions about basic Christian doctrines (i.e. Trinity, Jesus, salvation, etc.) that really needed to be cleared up. At the end of our chat, he still didn’t believe that what I was saying was true (“It doesn’t feel right to me,” he told me several times), but he told me how much he appreciated the conversation because he better understood Evangelical Christianity.  Before he left, I was able to pray for him and his family, as he was actively looking for a job.

The next day, he came back to the park and we talked some more. As our conversation was winding down, my friend Ron—who had followed the conversation both days—took a $20 bill out of his pocket and tried to hand it to this gentleman. Ron was met with a blank stare rather than a hand held out to receive his gift.  “What’s this for?” the gentleman asked nicely. Ron explained that he had recently received a major inheritance and so he wanted to share the $20 with him. “Buy your family dinner tonight,” Ron said. “I want to bless you.” But the gentleman wouldn’t take it. ““Thank you, but I just can’t accept it.  I didn’t do anything to earn that.” I could see in his eyes that he so badly wanted to take the money, but because he hadn’t earned it, he refused.

I wonder how many other people who drive by the Firehouse Car Wash have a hard time stopping and using the free vacuums, especially in this state of Utah where Mormonism stresses works over grace. But it’s offered at no cost to the user. All I had to do was drive in and claim my gift. In Mormonism, great stress is placed on observing the ordinances. Yet Paul wrote in Galatians 2:21b that “if righteousness could be gained through the law, Christ died for nothing.”  It grieves me when I see so many people who live around me—good, moral people with honorable intentions—unable to understand the meaning of a free gift, no strings attached.

Just as there’s a chance to vacuum your car for free and there’s a $20 bill held out for the taking, God offers us salvation by grace through faith, truly a free gift despite the fact that it cost my Savior everything He had. I can’t imagine my life without it.

This entry was posted in Grace, Salvation and tagged Grace. Bookmark the permalink.

21 Responses to Why Grace Can Be So Hard to Receive