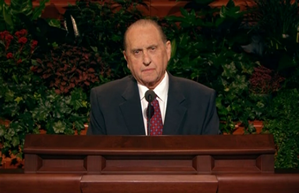 Over the past few years, I have read plenty of material written by faithful Latter-day Saints (none of whom have very high authority in the church) who insist that their leaders are not infallible and that LDS individuals must rely on “personal revelation” to confirm the official teachings coming from Salt Lake City.

Nice try, but to me, this is just “lip service.” Practically speaking, there is no doubt that the vast majority of the Latter-day Saint faithful listen carefully to their leaders and do not even attempt to “test it” using personal revelation. This theme seems to be emphasized by the leadership. For instance, in last fall’s general conference, two different general authorities dusted off Ezra Taft Benson’s “Fourteen Fundamentals in Following the Prophet” speech and quoted all fourteen points, just for emphasis. Among other points, Benson’s speech emphasized how the prophet could speak outside his area of expertise and did not have to use the phrase “Thus Saith the Lord” for it to be considered authoritative. Two different sermons, same message.

The article was written in time for this weekend’s spring general conference. Stack refers that after the men have given their counsel from the pulpit, the talks will be officially printed in the May 2011 Ensign magazine. They will also be “read, revisited and replayed at countless Mormon services across the globe. They will be treated with admiration and reverence. And each time (President) Monson enters a room, members will grow silent and stand as a gesture of unified deference.”

Listen to more selections of the article, supporting my hypothesis from above:

“Mormons don’t use the term ‘infallibility’ to refer to their leaders and readily acknowledge that they are imperfect men. In practice, though, LDS belief comes awfully close to that standard.”

“We pay lip service to the prophet’s fallibility,” says Edward Kimball, son of late LDS President Spencer W. Kimball. “But when you come down to specifics, we can’t think of any incidents where a prophet was wrong.”

“One of Smith’s most radical concepts was ‘continuing revelation,’ the notion that the scriptural canon did not end with the Bible and that well-established beliefs could be altered—even overturned—by new messages from haven to the leaders in charge. So much authority is ascribed to the LDS president, though, that quasi-prophet worship by the far-flung members of the 14 million-member faith seems unavoidable.”

“Smith knew his limitations and said a church president spoke for God only when he was ‘acting as a prophet.’ But few Mormons then or now could separate the man from the office. Instead, many have elevated his stature into an impossible realm.”

Let me ask several questions at this point:

I’ll believe an LDS apologist such as Michael Ash (who says the prophets are fallible and, in fact, often make mistakes) once the leadership condemns rather than quotes Benson’s “kick in the tail” speech. As long as a member’s “personal revelation” coincides with the teachings of the leadership, there should be no problems. And I don’t expect this philosophy to change anytime soon.